Oil and gas crews are out and about in Colorado after the flood, and at least 5,250 gallons of oil have spilled from tanks into the South Platte River. Nearly 1900 oil and gas wells have been shut down and hundreds of industry crews are assessing damage. In addition to the tank spill there is one pipeline rupture and other pipelines that have been compromised by the flooding. Read more from yesterday's  Denver Post article.

Meanwhile, some members of Frack Free Colorado went out with their video cams to collect footage of damage to wells and storage sites in their area in Weld County. They note that while getting the footage they developed headaches, burning skin, eyes and throat. The air smelled strongly of chemicals.

In addition to rescuing stranded people, emergency crews have also had to contend with broken oil and gas pipelines - and those that haven't broken yet are exposed due to eroded ground.


According to reports from the Denver Post, "Oil drums, tanks and other industrial debris mixed into the swollen river flowing northeast. County officials did not give locations of where the pipeline broke and where other pipelines were compromised."

Weld County is home to about 20,000 oil and gas wells, and companies have been drilling on the flood plains. Once the gas and oil companies were notified of the threats, they began shutting down drilling operations and transmission pipelines. Even so, that still leaves wells, tanks, gathering lines and transmission lines in the path of raging waters.

What does a flooded gas well look like? Here's a video that was posted to Facebook Friday evening.

No one expected this type of flooding: it's a one-in-500-year type of event, aided in part by hillsides denuded of trees resulting from wildfires over the past couple years. Even so, the results illustrate the risks of drilling in flood plains. Even when the company shuts off the drilling or shuts down a pipeline, there is little they can do to prevent flood waters from ripping tanks from their moorings or washing frack pit waste downstream.

More Photos of gas and oil infrastructure in the floodlands: (from the Boulder area): 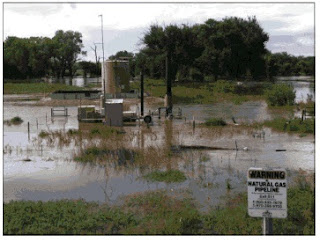 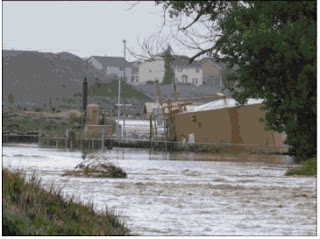 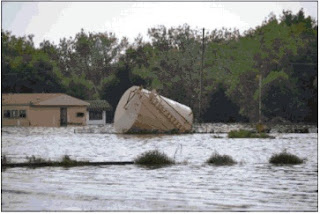 More photos at
weldairandwater.org
Posted by Sue Heavenrich at 9:15 AM 11 comments: