The Real Cost of Fracking 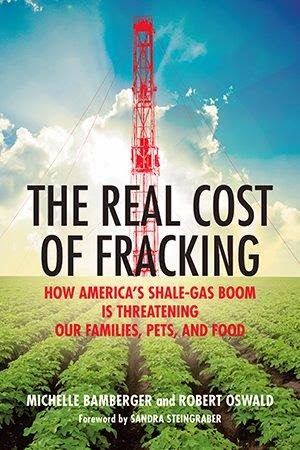 Earlier this week I had the pleasure of talking with Michelle Bamberger, a veterinarian and co-writer of the newly-published book, The Real Cost of Fracking (Beacon Press, Aug 2014). Like many living in Ithaca, Michelle Bamberger and her co-researcher, Robert Oswald had never heard about fracking until about five years ago. That’s when they learned that their property was surrounded by leased land and that their land, even without a lease, could be drilled under through a process called compulsory integration.

They were concerned about potential threats to air and water, to local wineries, tourism, and agriculture. But their involvement with veterinary medicine made them keenly aware of what was happening to animals and livestock in drilling areas. Upon hearing stories about cattle and other animals becoming sick and dying after exposure to drilling fluids, they began documenting health problems -  just as they would do when tracing a new disease. What they learned was that too often the people living in the homes and on the farms experienced health symptoms as well.

Bamberger and Oswald published their findings about impacts of gas drilling on human and animal health in a peer-reviewed journal a couple of years ago. But, says Bamberger, “we realized early on that there are a lot of people who would never pick up a scientific article.” So she and Oswald began writing a book that would reach a broader audience.

The Real Cost of Fracking: How America’s shale gas boom is threatening out families, pets, and food is a collection of case studies from Pennsylvania – families and farmers who have seen their animals and children suffer, watched their homes and land lose value, seen their retirement dreams shatter and, in one case, have become shale gas refugees. The book is well-documented, with lots of notes, well-indexed, well-grounded in science – and at the same time very readable.

In the beginning, Bamberger and Oswald outline the difficulties faced by scientists who are trying to study health impacts related to drilling. They discuss baseline water testing, safe drinking water standards, and challenges of air testing. Then they delve into individual case studies. In one chapter they tackle issues of farming and food supply; in another they examine issues of environmental justice.

“We wanted to take our scientific writing and turn it into an interesting story,” Bamberger says. Reading a chapter leaves you asking: if that were me, what would I do?

One caveat the authors put forth at the beginning of the book is that they do not use the real names of the people whose stories they share. While the names are made up, the stories are not, “but each of these stories represents hundreds of similar cases in this country,” Bamberger says.

Collecting information presented a number of challenges for the researchers – from the physical difficulties of reaching some of the locations to obtaining information. One of the obstacles to their research was non-disclosure statements. In many cases where drilling contaminated water wells, the drilling company would require homeowners to sign a statement pledging that they would not talk about their water contamination or any settlement issues before providing drinking water to the home.

The biggest problem with non-disclosure statements, says Bamberger, is that they inhibit the ability of health officials and state regulators to obtain important information about an incident.

Focusing on the health of pets and livestock may seem an odd way to document human health impacts, but Bamberger explains that animals are often the “sentinels” that indicate problems exist. Think: canary in a coal mine. While people head off to work and school, livestock and pets remain on the farm or in the home all day long, exposed to contaminants in air and water. Animals also have higher rates of reproduction and shorter gestation periods than humans, so problems with birth defects often show up earlier, Bamberger points out.

But sentinels can’t replace monitoring – and that’s what’s needed in shale gas country says Bamberger. She points to what happened after the BP spill in the Gulf of Mexico: the FDA stepped in because of concerns about seafood absorbing chemicals from the spill. They monitored for oil dispersants and other chemicals – and continue to monitor seafood. But there’s no monitoring of milk, meat or vegetables in and around gas wells, even where there have been spills on pastureland. At almost every meeting she's been to, Bamberger says someone asks whether the food from Pennsylvania farms in gas drilling areas is safe.

As far as whether New York should allow fracking, Bamberger says there’s a lot of science that shows we’re not ready. “Scientists are raising red flags,” she says, “but no one is listening. The government’s not listening. We should get it right before we go further.”

Posted by Sue Heavenrich at 10:55 PM No comments: 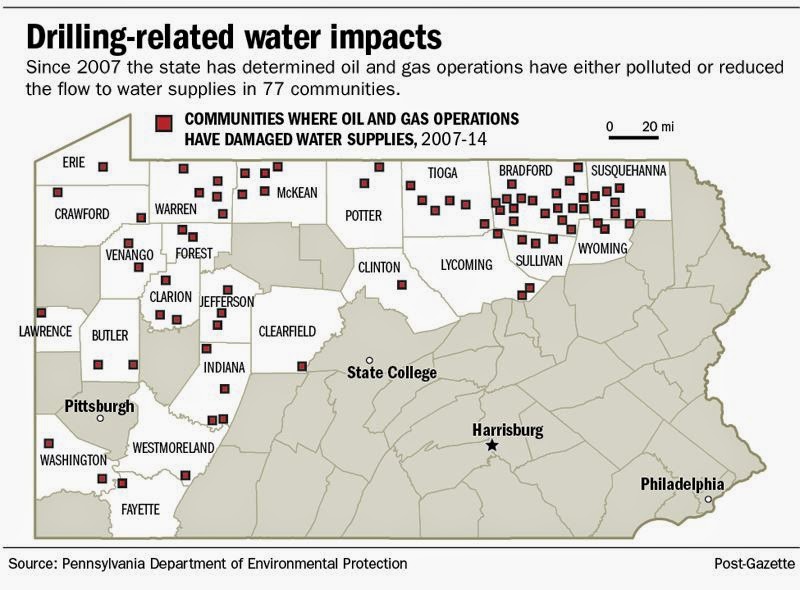 Back in July the Pennsylvania Department of Environmental Protection (DEP) admitted that oil and gas operations damaged water supplies 209 times since end of 2007.

Finally – six years into the Marcellus gas boom – DEP has released details of 243 cases in which oil and gas companies were found to have contaminated private drinking water wells. This past week the agency posted online links to the documents. Names and identifying information has been redacted, but you can read the documents here.

Some of these cases date back to 2008 but, when you look at the dates, DEP never got around to responding to them until months - or in some cases - years later. The cases include some where a single drilling operation affected multiple water wells.

Problems listed in the documents include: spills (waste fluids and other pollutants); high levels of methane gas; ethane; heavy metals; and wells that went dry or were otherwise undrinkable. These documents cover drilling-related water well problems in 22 counties, but most of the cases come from Bradford, Susquehanna, Tioga, and Lycoming counties.
Posted by Sue Heavenrich at 11:06 AM No comments: