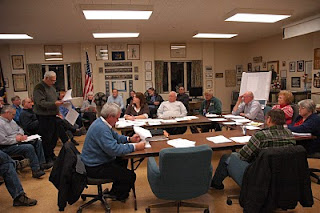 (photo of the Pulteney Town Board meeting by David Walczak)
On Tuesday, January 12 not many people in the region knew that Chesapeake Appalachia LLC had submitted an application to convert a natural gas well into a disposal well for gas drilling wastewater. But 24 hours later the news had been sent to list-serves across the region and by the time the Pulteney town supervisor gaveled the town meeting to order on Wednesday, 60 people had managed to cram into the meeting room and another 20 or so packed the vestibule just outside.

At issue: Conversion of the Bergstrasser 1 natural gas well into a disposal well. The Bergstrasser well, drilled in 1997 to tap gas trapped within the formation, is located just northeast of the intersection of and County Route 78 in the town of – less than one mile west, and uphill, from . The area is home to a number of vineyards and wineries, and is not only part of the wine trail but a tourist attraction.

sent an Environmental Assessment form to NY Department of Environmental Conservation on October 2, around the same time they filed an application for a UIC (Underground Injection Control) well permit with the Environmental Protection Agency (EPA).

According to reports from those who attended the Pulteney Town Board meeting last Wednesday, January 13, Town Supervisor Bill Weber made it clear that the town had only learned of the proposal some two weeks ago the DEC asked him to let the DEC be the lead agency on the SEQRA review of the project. Without consulting the rest of the town board, Weber gave DEC the nod to take over as lead agency. His reasoning: the town board would have reached the same decision.

Weber also said that the town has no involvement with the project – the town will only be involved when applies for a special use permit, and that had not been done yet. He assured people that the town Planning Board will schedule public hearings. Weber also mentioned that because he has leases with he will recuse himself from any decision-making processes on the application.

What Weber neglected to say was that he had been corresponding with ALL Consulting, who was completing the environmental assessments for . On September 23, Weber sent Steve Dutnell of ALL Consulting an e-mail letter noting that this was bound to be a hot topic and warning Dutnell to “get all your EPA and NYS DEC permits in place” before approaching the town for the necessary special permits.

Turning old wells into disposal wells may just be the trend of the future. Last year Fortuna received a permit from DEC to test the Mallula well in Van Etten, to see if it would be suitable for use as an injection well. Public outrage has kept the injectivity tests from happening, though the permit to conduct the testing may be renewed every 6 months over the next four years.

As more wells are drilled in the region – especially if the number of Marcellus wells is anywhere near the thousands anticipated – wastewater disposal will become an increasingly critical issue. While dumping salt water down old gas wells looks like a good solution to the DEC and the EPA, it looks like a lousy solution to residents who worry about contamination of their drinking water wells.

Posted by Sue Heavenrich at 6:16 PM