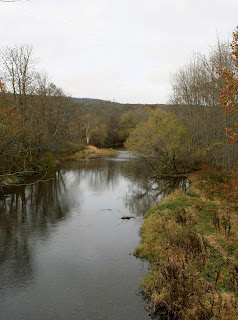 Marcellus drilling – even without any accidents or spills – threatens watersheds. At least that’s what preliminary data show, say two scientists at Philadelphia’s Academy of Natural Sciences. David Velinsky and Jerry Mead, working with U of Penn graduate student Frank Anderson, showed a definite relationship between environmental impact and drilling density (how many wells are drilled in an area). They found a significant reduction – 25 percent – in the populations of salamanders and certain aquatic insects in watersheds where there was more drilling activity.

“The important question, says Velinsky is whether there is a certain threshold “beyond which drilling will impair the ecological health of the watershed, regardless of how carefully the drilling is conducted.”
The scientists examined nine small watersheds in Pennsylvania: three had no drilling in the area; three were “low density” drilling areas, with an average of one well per 20 to 40 square kilometers (4240 – 9885 acres); three “high density” watersheds had anywhere from four to eight wells for that same area – a density close to the 640 acre units proposed for NY Marcellus wells.
They tested dissolved oxygen, pH (acidity) and conductivity. Higher conductivity has been shown to be related to Marcellus drilling. They also counted salamanders and the nymphs of caddisflies, stoneflies and mayflies. These particular species, says Mead, are especially vulnerable to changes in their environment. A reduction in the population or loss of these “indicator species” serves as an early warning that something is wrong in the environment.
The scientists found that the water conductivity levels in high-density drilling areas were almost twice as high as the conductivity measured at the other sites. They also found a significant decline – 25 percent – in the abundance of aquatic insects and salamanders in the high-density drilling areas.
Mead and Velinsky aren’t sure how the decline in the three or four indicator species will ultimately play out in how the watershed functions. “There could still be a lot of shredders that degrade organic matter in the stream,” Mead says . But how drilling impacts the overall ecosystem services of the watershed, from food sources for game fish to degrading nutrients that wash into the water … “That’s a good question that needs more study.” You can read their press release here.

What makes this study particularly important for us in NY is that the NYS Department of Environmental Conservation is developing a management plan for all of the state forests. And that plan includes drilling at densities that, according to Mead and Velinsky, are not healthy for watersheds.

Add to that the new, more stringent water quality requirements for all states included in the Chesapeake Bay watershed - lower levels not just for nutrients but also for sediments - and you begin to understand that drilling is not an isolated impact. Just clearing the land for well pads can affect local streams and distant estuaries.
Posted by Sue Heavenrich at 12:56 PM