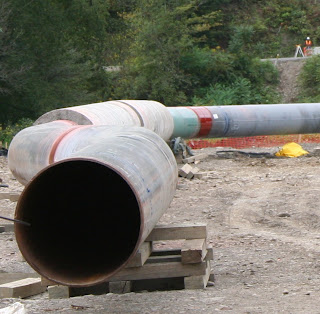 Today the Pennsylvania Department of Environmental Protection (DEP) announced that it has fined Chief Gathering LLC, of Dallas, Texas (a subsidiary of Chief Oil and Gas) a $34,000 fine for illegally discharging industrial waste in Lycoming County.

In August 2010 Chief was conducting hydrostatic testing at a pipeline project. Hydrostatic tests involve placing water in a natural gas pipeline at the required pressure to ensure there are no leaks before it is placed into service.
During those tests Chief discharged more than 25,000 gallons of hydrostatic testing water into the Big Run watershed – after an earlier notification in which Chief indicated to DEP that no discharge would occur. According to DEP none of the discharged water reached any nearby surface streams
A DEP investigation also revealed numerous other violations including:
In conjunction with the enforcement action, Chief voluntarily surrendered its discharge permit in early December.
Posted by Sue Heavenrich at 2:37 PM