Is "Environmentally Friendly Drilling" an Oxymoron?

There’s a growing list of technologies that gas drilling companies could implement to reduce their impact on the environment: using closed loop systems instead of frack pits, drilling multiple wells per site, using biodegradable fracking chemicals, and using valves to capture fugitive methane instead of venting, flaring or allowing it to leak into the atmosphere.
But does “lowering environmental impact” automatically make a technology “green”? Does it make it “environmentally friendly”? Dr. Richard Haut, founder and senior research scientist at Houston Advanced Research Center (HARC), thinks so, and he recently visited Cornell to promote his ideas.
“Industry has already adopted safety as a core value,” Haut said. So why can’t industry adopt “environmentally friendly drilling” as a core value, he asks?
Probably because, as Haut put it in the very next breath, extracting energy requires trade-offs. Still, drilling companies should consider such issues as land use, biodiversity fragmentation and ways to protect water sources, Haut said. He listed a number of specific problems that drillers need to face: water withdrawal during droughts, coastal issues, and impacts of urban drilling on noise and air quality.
As far as Haut is concerned, drilling is coming and the only question is how to minimize the damage. Right now about 50 percent of all wells drilled into shale, tight gas and coal-bed methane formations use hydro-fracking, he says. In 2035 that number will rise to 75 percent. 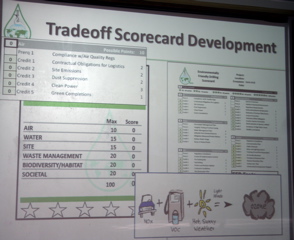 In the context of industrialized gas drilling, Haut says, “environmentally friendly” has come to mean “developing energy resources in a manner that minimizes impact on the environment”. And he thinks one way to help industry get there is to institute an “Environmental Friendly Scorecard”. Imagine something similar to the required nutrition labels found on packages of chips and the sides of cereal boxes – or the scorecard for Leadership in Energy and Environmental Design (LEED) certification developed by the US Green Building Council.
Drillers using Haut’s scorecard could gain points by reducing impacts in six areas: air, water, well site, waste management, biodiversity and habitat, and social structure. To get water credits, a driller would have to file an acceptable storm water management plan, conduct integrity testing of cement casings, increase setbacks from streams and water sources (though Haut didn’t specify any distances) and reduce their water use.
Haut’s use of “environmentally friendly drilling” to describe the reduced impacts of an industrialized activity that is, by it’s nature, anything but “environmentally friendly” left some people seeing any color but green.
“To say that drilling companies just have to “do it right” is an admission that the thousands of shale gas wells already made, and those underway now, are not being “done right”, says Cornell engineering professor Tony Ingraffea.
And that EFD scorecard? “Just a way to “greenwash” gas extraction,” says activist Hilary Acton.
You can read about Haut's ideas at his website.
Posted by Sue Heavenrich at 11:54 AM