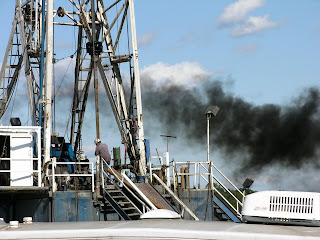 Natural gas is touted as a “cleaner, greener” fuel. But drilling, producing and transporting gas from well to market puts a tremendous amount of pollutants into the air. Volatile organic chemicals (VOCs), diesel fumes, particulates, and fugitive methane emissions contribute to smog, ground level ozone and climate change.
For the past year Cornell scientists Robert Howarth, Tony Ingraffea and Renee Santoro have warned that emissions from shale gas development are much higher than conventional drilling and likely to aggravate global warming. Their peer-reviewed research was published in Climate ChangeLetters this April, and just last month they released a new report that looks at the indirect emissions of carbondioxide from Marcellus shale development.
Since last year, the US Environmental Protection Agency (EPA) has been taking a harder look at air pollution resulting from oil and gas drilling operations. Today the EPA proposed updated standards - issued in response to a court order – that would rely on cost-effective existing technologies to reduce emissions. EPA believes these standards would help improve operators’ ability to capture and sell methane currently leaking into the air as “fugitive emissions” and result in more efficient operations while reducing air pollution.
Gina McCarthy, assistant administrator for EPA’s Office of Air and Radiation noted that the proposed standards will help ensure responsible production of domestic energy. “Reducing these emissions will help cut toxic pollution that can increase cancer risks and smog that can cause asthma attacks and premature death - all while giving these operators additional product to bring to market,” she stated in a press release.
The updated standards would cut volatile organic compound (VOC) emissions from several types of processes and equipment, including a 95 percent reduction in VOCs emitted during the completion of new and modified hydraulically fractured wells. Technologies referred to as “green completions” already exist that allow companies to capture gas that currently escapes to the air.
According to the EPA, domestic gas production is growing, with more than 25,000 new and existing wells fractured or re-fractured each year. The proposed VOC reductions will help reduce ozone and reduce methane, which EPA labels “a potent greenhouse gas”.  Not only that, upgrading storage tanks and other equipment could save the industry tens of millions of dollars each year, says EPA.
EPA is required to take final action by Feb. 28, 2012. As part of the public comment period, EPA will hold three public hearings, in the Dallas, Denver and Pittsburgh areas. Details on the hearings will be announced soon at http://epa.gov/airquality/oilandgas
Posted by Sue Heavenrich at 4:18 PM