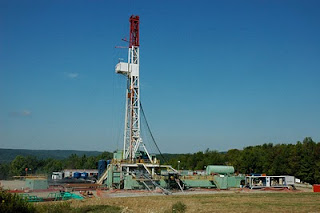 Penn State scientists just released a report on water quality in private water wells in rural PA before and after drilling of nearby Marcellus Shale gas wells. Although the study didn’t find significant contamination of drinking water wells, researchers caution that there needs to be more intensive study.
They also noted unexpected high levels of bromide after drilling, and expressed concern for health impacts. In addition to testing water, the study also documented the enforcement of existing regulations and the extent of voluntary testing by homeowners.
The study, which took place in 2010 and 2011 focused on 233 water wells located in close proximity to Marcellus gas well pads. Phase I of the study (2010) tested 48 water wells within 2500 feet of a well pad both pre- and post-drilling. Phase II tested an additional 185 wells located within 5000 feet of a Marcellus gas well pad post-drilling.
A statistical analysis of pre- and post-drilling water chemistry did not find significant differences due to drilling or hydro-fracking when considering the pollutants “most prominent in drilling waste fluids.” Unlike the Duke study, this study found no significant increase in methane after drilling, and no significant correlations with distance from the well pad.
But, the researchers pointed out, this lack of data could be due to the lack of testing beyond 1000 feet. According to PA law the industry is presumed responsible for pollution of water supplies within 1000 feet of a well pad for six months after drilling. So, few people pay for testing beyond that distance.
One thing the scientists did find was increased levels of bromide in water wells after drilling and/or fracking. “These increases may suggest more subtle impacts to groundwater and the need for more research,” they write. Increased bromide levels were often accompanied by increased levels of sediment and metals in the water. These increased levels were observed within 3000 feet of the gas well pads – suggesting that 3000 feet is a more reasonable distance for testing than the current 1000 feet.
Bromide is rarely tested as part of the industry-sponsored pre-drilling baseline sampling. The PSU researchers selected bromide as a parameter for their study because it is typically not found in detectable concentrations in undisturbed groundwater and because it is found in relatively high concentrations in drilling gas wastes. For those reasons it serves as a good indicator of the influence of gas drilling on groundwater.
In the pre-drilling samples bromide levels were always well below detection levels (0.1 ppm). But in seven wells bromide was detected in measurable concentrations. Those wells were located within 1670 feet of five different Marcellus well pads that were operated by three separate companies.
While bromide does not present a health hazard by itself, it combines with disinfection agents to create a carcinogenic byproduct - and that concerns the researchers. They suggest two potential sources of the bromide: drilling mud and flowback fluids.
You can read more of their findings at
http://www.rural.palegislature.us/documents/reports/Marcellus_and_drinking_water_2011_rev.pdf
Posted by Sue Heavenrich at 10:50 PM