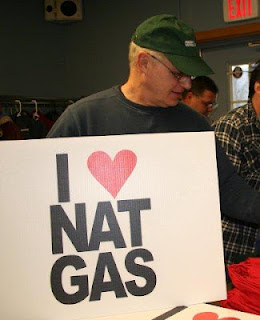 As gas prices fell, drillers headed west from the dry Marcellus shale region to Ohio where the gas is "wet". Gas containing ethane and propane was, for awhile, bringing in more cash. But now that market, like the gas market, is saturated, notes a report in the Pittsburgh Post Gazette. This might be what you'd expect from an industry that is mired in continuous boom-bust cycles.

So maybe it comes as no surprise that one of those companies - Chesapeake - is withholding royalty payments in blatant disregard of the leases they signed. In January the company notified Pennsylvania landowners of its intent to deduct the costs of production from royalty payments. Those costs range from 70 cents to $1 per 1,000 cubic foot (mcf) of gas produced. Given the all-time low gas prices, that means that some royalty owners have seen their payments slashed by 90 percent or more this year, notes a recent report in Bloomberg.

Which leads me to wonder why Governor Andy Cuomo would be in a rush to allow hydraulic fracturing into the Southern Tier of NY.
Posted by Sue Heavenrich at 4:34 PM