According to a new report by Penn State soil scientists, 50 to 70 percent of the shale-gas pads that are developed on slopes are prone to erosion and sedimentation problems. This isn’t surprising, but it’s nice to have data back up what some of us have suspected all along.

In a press release Patrick Drohan, assistant professor of pedology and principle investigator for the study, said that the potential for erosion problems is substantial because of the extensive scale of the shale-gas play. Not all sites have problems, but at least 10 percent of well pads are constructed on slopes greater than 8 percent, and Drohan worries about such areas every time there is an intense rain event.

The problem is that most soils on the Allegheny Plateau, where shale-gas development is concentrated, are acidic, rocky, shallow and of poor fertility. About a quarter of the sites are underlain by “fragipan”, a subsurface horizon that restricts downward root growth and water movement. (Yup, we’ve got that here in NY, too.) The fragipan layer complicates drainage, especially where pipelines run down slopes.

The researchers are also concerned about the 21 percent of pads that have been developed on potentially wet soils – places that potentially have a water table within 18 inches of the surface. Drainage problems around those sites could result in the loss of amphibian habitat. Well pad development in such areas could disrupt local water movement around pad and the recharge to nearby headwater streams as well. 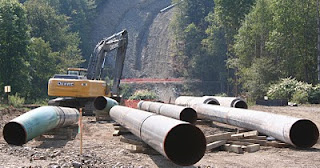 Drohan and his colleagues are also looking at ecological disruption caused by shale-gas infrastructure, such as pipelines, that often traverses steep slopes and poorly drained areas. “We now think that pad development is a lesser landscape disruption than the pipelines,” said Drohan.

Posted by Sue Heavenrich at 3:49 PM