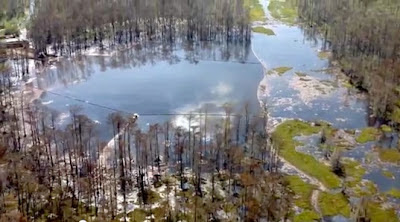 After a week of rain, more residents are finding bubbles seeping through the surface of their land  near the ever-growing sinkhole in Assumption Parish, LA.

No one seems to be able to control the expanding Bayou Corne“sinkhole” – an oil/gas industry-owned salt dome storage facility that measures one mile across by 3 miles long.  The collapsing dome has engulfed eight acres and could, experts say, grow to the size of 30 football fields. The dome collapsed in August and some 300 people who were evacuated still remain without their homes.

If this were not enough, on December 19 residents around Lake Peigneur were shocked to learn that the Department of Natural Resources is considering a permit to develop natural gas storage caverns beneath their lake. This is the same lake that, in 1980, experienced a huge sinkhole when a gas drilling rig accidentally drilled into an underground salt cavern. Two and a half billion gallons of water was sucked into a giant whirlpool that measured about 100 feet across. It also sucked down 11 barges, a tugboat, fishing boats, and 65 acres of land from Jefferson Island. Fortunately the 55 miners in the salt caverns managed to evacuate the catastrophe.

Assumption Parish residents are wondering whether anyone is paying attention to their plight. Their governor, Bobby Jindal has not dropped by since he declared an emergency and mandated evacuation in early August. Meanwhile, the Houston-based Texas Brine company has failed to meet several deadlines for the cleanup effort.
Posted by Sue Heavenrich at 2:10 PM