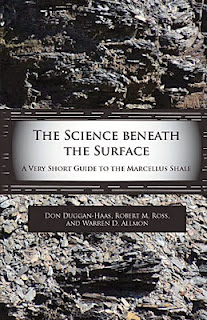 When asked about whether NY will allow high volume horizontal hydraulic fracturing (aka: fracking) Governor Cuomo is fond of saying “Let the science decide”. But the truth is, science can’t “decide”. The best science can do is present the facts, such as they are known. Policy-makers are the ones who “decide”.

And now there’s a new book about the science of the shale beneath our feet – a book that could help our local and state legislators and regulators put more science into their decisions. The Science Beneath the Surface: A very short guide to the Marcellus shale was recently published by the Paleontological Research Institute. PRI has a long history of addressing contentious issues, such as evolution and climate change. Now add shale to that list.

This book grew out of a project to create fact sheets to inform residents about various aspects of shale drilling. The authors – Don Duggan-Haas, Robert Ross, and Warren Allmon – added new information and a lot more depth to make the book. Unlike the earlier projects on evolution and climate change, where there is little scientific controversy about the major points, there are still significant gaps in the basic knowledge about Marcellus shale - and significant disagreements about interpreting the data.

Shale science is grounded in the rock, but research on gas extraction goes beyond geology. It includes environmental studies, land use, agriculture, water, air, human health, engineering… and each of those could demand an entire volume of its own. But Duggan-Haas, Ross and Allmon wrestled the information into one volume that explains the basic science of shale, drilling, water, risk and climate change in language that the average reader can understand – and does it without advocating for or against any particular action.

The authors describe the geology and natural fracturing of the formation, discuss Naturally Occurring Radioactive Materials (NORM) and why these are important to soils, plants, animals and people. They also address the volatile organic chemicals released during gas extraction and production.

Want to know how to drill a well? Read chapter three. Tired of hearing industry folk claim that fracking has been used for at least 50 years? It hasn’t, say the authors, and they explain why.

They discuss human-induced seismicity and earthquake “swarms” and devote an entire chapter to water. Ross and his colleagues also include a chapter on life cycle analyses of gas wells and examine something called the PFCI: potential future climate impact. Even if it turns out that gas is better than coal, as far as greenhouse gases go, the fact is that burning gas still contributes greenhouse gases to the atmosphere. So if we simply switch to burning more gas long-term… “We’ll have a climate disaster,” says Ross. “The fundamental challenge is to find ways to use less energy.”

As a very short guide, The Science Beneath the Surface does a pretty good job. There are a couple places where information seems incomplete or lacking, for example well casings.
While the authors note that improper casings and casing failures have contributed to contamination of groundwater, they don’t say is how often this happens (6- 7 percent of the time in Marcellus wells drilled in Pennsylvania with a 60% failure rate over 20 years). And while they mention erosion regulations (SWPPP) they don’t say anything about federal exemptions from the Safe Drinking Water Act.

Despite the small glitches, this book provides a thorough introduction to the science of shale and should be in the hands of every elected official in the state - especially if they want to make “science-based” decisions. Read my full review and comments from the authors at Tompkins Weekly.
Posted by Sue Heavenrich at 11:00 AM