Does a Lease give Gas Company the Right to Keep Friends off your Property? 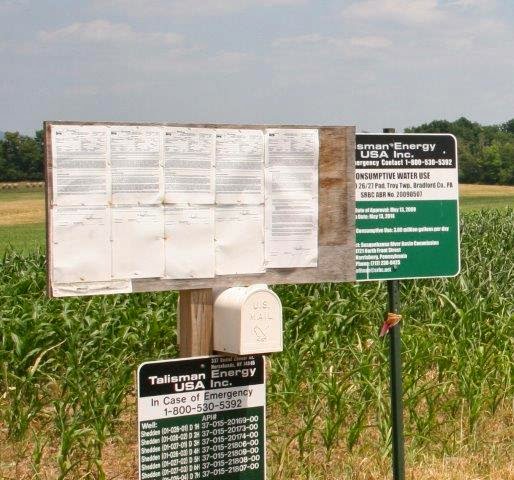 When a gas company leases land, exactly what do they "own"? It's understood that they've got the right to extract gas from under the surface - and if they've leased surface rights, they can build access roads and other structures.

But does a lease give the company the right to dictate who comes on the surface - even for properties where the company has no active drilling operation? What about properties for which the company only has subsurface rights?

Cabot Oil & Gas Corporation thinks so - and they have gone to great lengths to keep an individual from stepping foot on property they don't even own. Last fall a judge ruled in Cabot's favor, giving them an injunction that bars local resident and citizen-journalist Vera Scroggins from Cabot-owned properties. That injunction also bars her from any property in the county where Cabot only has a lease to extract gas from under the surface, with no surface rights. Those properties include: the grocery store where Scroggins does most of her shopping, her bank, the recycling center, the hospital, and many friends.

What sort of dastardly act has Scroggins committed to deserve such a ruling? The retired nurse aid and grandmother happens to be one of the more vocal opponents to gas drilling in her town. For the past few years she has acted as a citizen-journalist, documenting the activities of gas companies operating in the area, and giving tours to visitors to show them what industrialized gas drilling looks like. She has testified before state regulatory officials, and asked questions of gas company employees - too many questions, apparently. Her "crime": attempting to hold the gas drillers accountable for their activity.

In response, Cabot hit her with a lawsuit and then obtained this outlandish injunction that bars her from driving on local roads, spending money in local shops, or taking a casserole to a sick friend. To say that this injunction is "overbroad" is an understatement. It violates her constitutional rights and the rights of any other individual - including journalists - who might stop on a public road to take a photo of gaswell activity.

This ridiculous injunction should also give landowners pause: just what rights are they losing when they sign a gas lease? Even if they only allow subsurface rights (gas company has no rights to any surface activity) are landowners signing away their freedom to invite who they want onto their land? And in a state like NY, where compulsory integration allows landowners to be forced into drilling units against their wishes, does that mean gas companies can dictate who they can invite to hunt on their property?

As for Scroggins, Cabot did not give her a map of all the leased land in her home town. It is up to her to determine which roads she is allowed to drive down, how close she can get to the public school, whether she can deposit a check (no) or buy a candy bar (no) or get her car fixed at the local garage (no) or go to the emergency room (no) ... heck, even the local jail is off limits should she accidentally step onto leased property! And should a friend knowingly invite her over for lunch , they could both end up in the hoosegow. (clarification: Vera says she can drive down any road; she just can't stop and "alight on the properties" that are leased)

A hearing to vacate the injunction is scheduled for Monday, March 24 in Montrose, PA. Fortunately, public interest attorneys are going to bat for Scroggins, and you can read their "Brief in Support of Motion to Vacate Preliminary Injunction" here.