Air Pollution from Fracking Affects areas where there is No Drilling 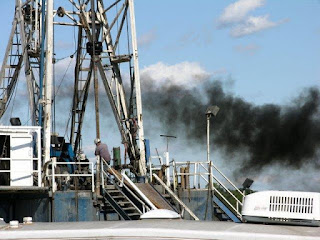 A new study finds that air pollution from industrialized drilling and hydrofracking can likely travel hundreds of miles, even to states with little or no drilling. The study, published in the June issue of the journal, Atmospheric Environment, shows that emissions associated with hydraulic fracturing and shale gas operations could be polluting air in cities far from the drilling pads.

Scientists from the University of Maryland looked at levels of ethane in the air of Baltimore and Washington DC. They used hourly measurements of volatile organic chemicals (VOCs) from Photochemical Assessment Monitoring Stations (PAMS) in the Baltimore and DC areas. The PAMS don't collect data on methane but they do measure ethane, which can be used as a tracer for fugitive natural gas production emissions. While composition varies from site to site, ethane makes up a significant portion of gas produced from Marcellus shale.

Analyzing data collected between 2010 to 2013, the researchers noticed that "daytime ethane concentrations have increased significantly since 2010, growing from around 7 percent of total measured nonmethane organic carbon to around 15 percent in 2013."

It is important to note that neither Baltimore nor Washington DC have fracking operations in or around their metropolitan areas and, until late last year, the state of Maryland did not allow fracking. So where did this air pollution come from? The trend in increased ethane, say the researchers, appears to be linked with the "rapidly increasing natural gas production in upwind, neighboring states, especially Pennsylvania and West Virginia."

They compared the Baltimore/DC data with a control site outside of Atlanta, GA, a region without new, widespread gas drilling operations. The PAMS site in Georgia did not show the same trend in increased methane as seen in the northeast.

The scientists conclude that the increasing amount of ethane in the air indicates that "a substantial fraction of natural gas is escaping uncombusted" and traveling downwind. As shale gas production expands, this trend will continue in downwind regions, they say, noting a disappointing trend in regional air quality. Also, this observable increase in ethane corresponds to a regional increase in methane - a critical greenhouse gas.

Posted by Sue Heavenrich at 7:18 PM