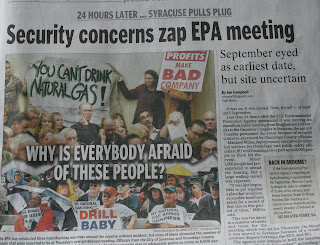 Months ago the EPA scheduled four hearings across the country to gather public comments regarding their about-to-be-started study on hydraulic fracturing. There was a hearing in Colorado, a hearing in Texas, a hearing in Pennsylvania. The final hearing was scheduled for Binghamton, NY this Thursday - tomorrow. On Monday - just four days prior to the hearing - the EPA decided to move the venue to Syracuse.

Why? According to Carolyn Gillette, one of the many people in charge of planning, registration etc, "the last minute change to Syracuse was caused by Binghamton University taking several actions to dissuade EPA from holding the meetings at their campus, including increasing the cost from $6,000 to almost $40,000." A hefty price tag for the taxpayer, no doubt.

The change in venue - and increase in cost - may have had something to do with two rallies being planned for that same day. Environmentalists had invited some bands and speakers (congressmen, film stars and other celebrities) and planned to stage a rally in one of the parking lots. Not to be upstaged, the pro-drilling crowd pulled together their own rally. And the folks at Binghamton University started counting heads (1200 registered for hearing plus another 5,000 or so for the rallies) and they started tallying up the costs for security, and things got .... expensive.

So EPA pulled a switcheroo - moving the hearing to Syracuse. Which meant a couple extra hours of driving for some folks, re-negotiating the bus transportation for those trying to reduce their carbon footprint, canceling and making hotel reservations...... But by Monday night people were already figuring out carpooling.

"Hold the phone," said a friend when I offered to drive. "Let's wait and see if they intend to stay in Syracuse." Why wouldn't they stay, I wondered. I mean, this is the EPA, and this hearing has been scheduled for months, and they really do want public input ... don't they?

Apparently not - or at least not yet. Mid-morning Tuesday we got the news that the EPA had canceled the hearing in Syracuse. No, they weren't moving to another venue. They weren't holding it on the 12th. At all.

Surely, this was a joke. But no. Says Carolyn Gillette, "EPA was forced to cancel the August 12th meeting following a conversation this morning with the Onondaga County Executive’s office, during which concerns were raised about the ability to complete security preparations for the meeting on such short notice...... Onondaga County officials did not feel they could arrange the necessary security for protecting people and property with ongoing rallies outside the meeting site."

But don't worry, she said. We'll hold the hearing in September. On some (as of yet undisclosed) date at some(as of yet undisclosed) location. Oh - and for those of you who registered to present oral comments? well, you'll have to register again - once we set that up. Kind of unfair to those who expected to have an opportunity to speak to the EPA.

However, people who believe in all that's good in democracy sent numerous emails of protest and, a few moments ago Carolyn G. advised them that, yes, if they were already registered to speak they may retain their speaking slot. Now all that's needed is a place to meet.
Posted by Sue Heavenrich at 12:30 PM