Marcellus Not the Only Game in Town 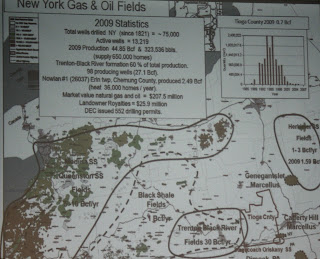 The NY Department of Environ-mental Conser-vation (DEC) hasn't completed the SGEIS (Supplemental Generic Environmental Impact Statement) yet for high-volume hydro-fractured wells in the black shales. But that doesn't mean companies have stopped drilling.

The number one producer last year: the Nowlan 1 well in , a small town in Chemung County. "Despite what you hear about a moratorium, there's significant activity going on in the state,” Zaengle said. Of course, he added, there's much more drilling activity in PA because Marcellus is where many of the companies want to invest their drilling energy.

"Unfortunately, Cabot has done a lot to create bad publicity for Marcellus exploration," Zaengle said, criticizing what he feels has been haphazard drilling in Dimock. "Their operation there is not clean, good quality production. He hopes the company will go to more ‘environmentally friendly’ drilling in the future -  placing six wells on a single pad instead of the current scattering of vertical and horizontal wells across the landscape.


Still, Zaengle noted that geologists have learned much from Cabot’s production figures. Wells in the 7-square mile Dimock gas field are producing 100 million cubic feet (mmcf) each day. "At $4.75 per thousand cubic feet (mcf), that gas is bringing in $475,000 each day - $173 million per year," he said.
The length of lateral well bores has increased as well, Zaengle said. He claims that most horizontal wells in PA are being drilled with 5,000-foot laterals, and that Range Resources has been drilling 7,000-foot laterals. They do 18 stages of frack, Zaengle pointed out. Ironically, as companies pursue gas trapped in the tight Marcellus shale, one of the most productive wells drilled in PA is in the Purcell limestone.
Posted by Sue Heavenrich at 2:58 PM