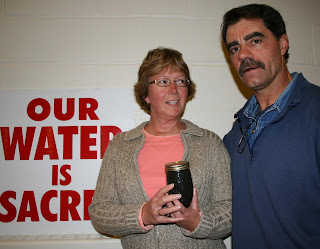 corrected Dec 8, 2010
Grimy, fizzy, combustible. That’s how Joe and Bonnie Todd describe their water. It’s full of sediment and has so much methane that the gas causes vapor-lock in the water tank – something Bonnie found out when she was trying to run a load of laundry.
The Todds believe their water woes are related to gas drilling activity about 3,000 feet to the west. Over the summer Anschutz Exploration Corporation drilled a couple gas wells on the Dow farm up Yawger Road. They’re looking for gas in the Trenton-Black River layer – a dolomite formation buried thousands of feet below the Marcellus shale. The gas lies trapped in grabens, or troughs, situated between parallel faults.
Getting gas out of dolomite pockets doesn’t require the same kind of hydraulic fracturing used in Marcellus wells. But the drillers still have to stimulate the deep wells to get the gas flowing.
They still need to drill through layers of stone, crossing through aquifers on their way down. And that means using drilling muds and friction-reducing chemicals. It also means injecting a weak solution of hydrochloric acid to dissolve any residual limestone in the dolomite.
“I was told the well would be a deep well,” Joe said. “I was told we wouldn’t be dealing with fracking chemicals.” He never expected methane to be a problem.
The Todds aren’t the only ones with water problems – nine of their neighbors have also found high levels of methane and sediment in their water. They’ve complained to the NY Department of Environmental Conservation (DEC), but DEC claims that “the way the gas wells were constructed makes it unlikely that the gas has migrated from deeper formations into the aquifer.”
As for the sediment – DEC attributes that to seasonal fluctuations or mechanical failures of the homeowners’ wells. But, the Todds point out, what’s the likelihood of ten different homes experiencing the same problem at the same time?
What frustrates the Todds is that they wanted nothing to do with drilling in the first place. They didn’t sign a lease. But enough people did sign, and by the beginning of the year the Todds were placed into the drilling unit by “compulsory integration”.
In NY, when 60 percent of the landowners land in a drilling unit has been leased have leased their land, unleased land may be “pooled” into the unit. Read more here and here. Even though the Todds didn’t want to lease, Anschutz now had the right to drill and extract gas from beneath their property.
If this is what happens with a deep well, Joe asks, what will happen when they start drilling Marcellus Shale?
To learn more about the issues surrounding compulsory integration and Big Flats, read Peter Mantius's excellent article here.
You can read a longer article about the dirty water in Big Flats in this week’s Broader View Weekly. It will be posted here in a couple weeks.
Posted by Sue Heavenrich at 8:50 PM