On Monday night the Village of Owego decided to conduct environmental assessment before voting on the Inflection-wastewater sale.
Before a standing-room-only crowd, the village Board of Trustees voted to retain the legal services of Syracuse law firm Hancock and Estabrook to assist in the environmental review and regulatory compliance. Owego Mayor Ed Arrington explained that the board was not prepared to vote on the sale at that time. “There is still additional work to be done,” he said.
The deal, which could potentially generate as much as $3.6 million a year for the cash-strapped village, still leaves a lot of questions unanswered. Residents want to know whether the Village is limited in selling only to Inflection, how – and whether – the agreement can be renewed, and who pays for the development of the pumping site.
The problem is that no one – except Village officials, Inflection representatives and a bunch of lawyers – has read the agreement. That’s because village attorney Irene Graven is denying all FOIL requests for documents related to the sale.
“The agreement may be impaired if it is released right now,” Graven said at Monday night’s meeting.
Environmental attorney Helen Slottje insists that there is no basis under the Freedom of Information Act to keep the agreement under cover, and Robert Freeman of the NY Committee on Open Government concurs. 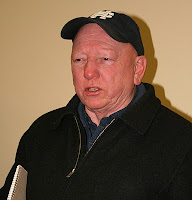 Graven acknowledged the difference in opinions and left an opening to revise her stance. “I’m reviewing the (FOIL) requests,” she said last night.
People need an opportunity to see the proposed agreement, says Kevin Millar. The village resident has, through conversations with board members, learned that the contract ties the village into a ten-year lease with Inflection.
“It sounds like the contract was developed by Inflection,” Millar said. And he’s concerned that the agreement might not be in the best interests of the Village. “If we can’t see the contract how can we be sure it is a good deal for the taxpayer?”
Posted by Sue Heavenrich at 1:41 AM