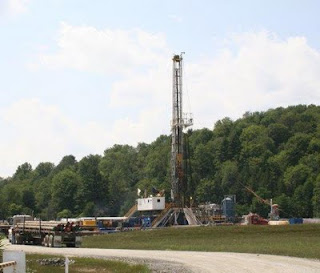 It’s tough love time here in Marcellus Country. The attorney general of Maryland is suing Chesapeake for polluting the river, Dimock residents are suing Cabot for polluting their water wells and a couple weeks ago the minority members of the congressional committee on Energy and Commerce released a report identifying 750 or so of the hazardous and toxic chemicals drillers inject into the ground.
Now, to make matters worse, 160 or so uppity upstaters (Broome & Tioga counties, NY) are suing Chesapeake Energy and Statoilhydro for extending their gas leases wa-a-ay beyond the expiration dates.
Over the past two years Chesapeake – and other energy companies – have been mailing letters to landowners stating that the state’s delay in issuing permits for horizontal shale drilling constitutes “force majeure”. This is baloney.
When included in a contract a “force majeure” clause excuses a party from fulfilling its contractual obligations due to unforeseen events beyond its control. Such events include natural disasters such as floods, hurricanes, and other “acts of God” as well as terrorist attacks, civil unrest and acts of war.
Except for the tornado ripping a swath from Erin to Danby last week, and the occasional flood, we haven’t seen force majeure-worthy events in our neck of the woods. However, Chesapeake’s “force majeure” clause in their gas lease tries to cover all the bases. It protects the gas company when their work is “prevented or delayed by such laws, rules, regulations or orders, or by inability to obtain necessary permits, equipment, services, material, water, electricity, fuel, access or easements, or by fire, flood, adverse weather conditions, war, sabotage, rebellion, insurrection, riot, strike or labor disputes, or by inability to obtain a satisfactory market for production or failure of purchasers or carriers to take or transport such production, or by any other cause not reasonably within Lessee’s control…” [language from actual leases filed in Broome County].
The only problem is … no one is stopping Chesapeake – or anyone else – from drilling wells in New York. And, as so many industry geologists keep pointing out, we have “a stacked play” here in NY. That means lots and lots of layers to drill. Of course, if they really want to conduct high-volume horizontal hydraulic fracturing in shale, they can. All they have to do is file the appropriate environmental impact studies. But, as one Talisman spokesman said a couple years ago, that takes money.
Posted by Sue Heavenrich at 6:53 PM