Books from GasLand - The End of Country 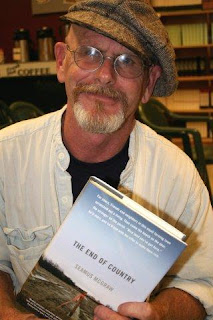 The End of Country

By Seamus McGraw
Random House, 2011
Some folks drill into the shale for gas, others for stories. Seamus McGraw, a Dimock lad, recently published a book about how drilling has impacted his neck of the woods. But The End of Country is about more than drilling. McGraw mixes memoir and documentary to reveal the character of those most impacted by drilling: Victoria Switzer, a retired school teacher who moved to Dimock to build her dream home; Ken Ely who quarries bluestone from his farm just uphill of Switzer; Rosemarie Greenwood, an aging dairy farmer who apologized for not baking muffins because her oven stopped working years ago.
When Ely tells him that the land is resilient, McGraw understands that he’s referring to past years of timbering, dairy farming, coal mining and, now, gas drilling. “Sure, you could kill it if you took too much,” Ely says. People need to understand that the land doesn’t owe them a fortune, just a living.
So why did people sign gas leases? For Rosemarie it was a way to keep the cows fed and the grain bills paid for one more year. For Ken it was another way to work his land. For Victoria it was an ambivalent faith that drilling might provide energy security to the region and the nation. The leases are less about money than about hope for a better future, one in which young men and women are not sent off to war to secure access to foreign oil fields.
A lot of the problems with drilling and gas distribution have mechanical solutions, McGraw says. Gas lost through leaky valves and pipes, referred to as “fugitive emissions” represents a loss of money for the energy corporations. “They could fix the problem but they don’t because they are too concerned about their production rates,” he says. What people need to understand is that public policy that forces the companies to address these issues not only protects the environment but is also in the best interest of the companies.
One question McGraw has for the gas companies is why they continue to power their industrial extraction efforts with expensive diesel. “Here we are sitting on top of the second – or third – largest reservoir of natural gas in the world,” he said, “yet how are they running the rigs? Diesel!” Drillers could be using gas to power everything from drilling rigs to their fleets to the generators that power the fracking operations.
Sure, Marcellus drilling has changed the countryside, McGraw says. “We can compare what it is now to what it was like 15 years ago, but the more important question is where are we going to be 5 or 10 years from now?”
Regardless of your thoughts on drilling or leasing, The End of Country makes for compelling reading
Posted by Sue Heavenrich at 7:24 PM