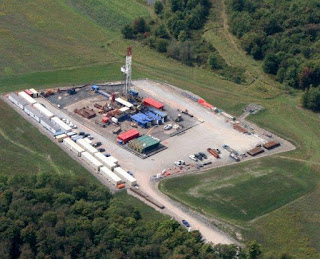 A homeowner in Portage County, Ohio, blames fracking at a well 1,000 feet away for damage to her house. The damage started in September, soon after the well went online. There are cracks in her walls and ceiling and through the masonry of her fireplace. Water has been leaking through the chimney and into her house – and her homeowners insurance isn’t going to cover the damage.

Two separate structural engineers have examined the cracks and confirm that they are caused by vibrations. Even though the well is 1,000 feet away, the vibrations sound like a helicopter outside her window.

Homeowners in the Baldwin Hills area of Los Angeles are also complaining about cracks in their homes. These aren’t from recent quakes, they say. They attribute the cracks in their foundations and walls to vibrations from fracking in the oil field next door.

And one homeowner in Arkansas is taking the drilling company to court over damage to her home: cracks and foundation shifts due to vibrations from fracking.

Just how far does a house need to be from a well to be safe from frack cracks and other damage? The recently proposed Fracking regulations for New York establish a setback of 500 feet for homes and schools. But if these reports are any measure, even 1,000 feet may not be far enough.
Posted by Sue Heavenrich at 6:36 PM