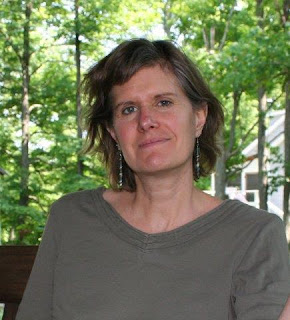 Today is Earth Day. For most of us it is no different from any other day: we go to work, fix meals for the kids, rake the leaves and maybe – if the soil is warm enough – plant a few seeds.

For Sandra Steingraber, this Earth Day is a time for pause, for reflection because, when you’re separated from the earth by steel bars, there’s not much else to do. Sandra was arrested for trespass during a protest of Inergy’s gas storage facility on Senaca Lake. She is a passionate advocate for protecting the earth for our children and their children. And, from what I hear of the jail, it is enough to test anyone’s resolution.

This is the first of her letters from the Chemung County Jail in Elmira, NY.

When Henry David Thoreau spend a night in jail for civil disobedience – defining the term in the process – he was served chocolate and brown bread for breakfast. The tray that was slid under my bars at 5:00am this morning contained nothing as tasty. In fact, I’d be hard pressed to say what the ingredients were. Packets of instant hot cocoa (artificial) are available from the commissary for a price – along with ramen noodles, decaf coffee, Jolly Rogers, shampoo, pencils, envelopes and paper.

There is no window in my cell. The lights are on all night. The television is on all day. Through the bars that make up the fourth wall of my new living quarters, I have a view of the catwalk, which is patrolled by guards, and then another wall of bars, and beyond those bars is a window made up of small panes of opaque glass. At about seven o’clock, one of the inmates asked for fresh air, and the guard, whom everyone calls Murphy’s Law, cranked open the grid of panes, just a little.

Now, I can stand at my own bars, and move my head in different directions – jumping up and down works the best – and see through the scrims of multiple layers of bars – a glimpse of the outside world. There are row houses with windows and no bars – which in fact suddenly seems miraculous – and I thought I saw a bird fly by. No trees through; only slinky–like concertina wire. Somewhere, beyond the shouting of the television, there are church bells.

Thoreau said, about his own experience with incarceration, that the confinement of his physical self was inconsequential; that freedom was a state of mind. Or something like that. I have neither the book, nor Google, to help me fact-check. But I am very aware of my physical self, and sense that my biological life in jail is part of my message. Even though I am entirely cut off from everything, I know and love - my children and my husband, the April return of birdsong and wildflowers and pollination and photosynthesis. I believe this is the place to speak about fossil fuel extraction in general and fracking infrastructure in specific.

I now inhabit an ugly, miserable, loud and ungraceful world. There are no flowers; no local, delicious food; no tranquil landscapes; and not even coffee or tea.

If we do not want New York to become a prison of wellheads, pipelines and compressor stations; if we do not want the violence of climate change instability and mass species extinction; if we do not want to leave our children a diminished world bereft of frog song, bees, coral reefs, sea ice; then coming to a place as far removed from the rhythms of the natural world as a jail cell is not an inappropriate place to say so.