Pipeline Spills Can Make You Sick 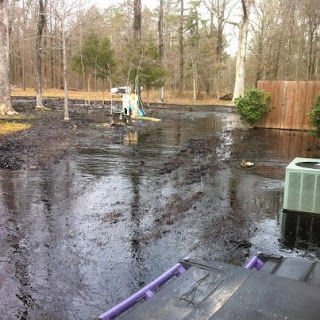 Turns out that having a pipeline rupture and flood your neighborhood with bituminous tar sands oil isn't healthy for kids - or anyone, for that matter. People living a mile away from the evacuation zone in Mayflower, Arkansas are experiencing health impacts: sore throats, headaches, stomach aches and respiratory problems.

According to a recent article in Huffpo, school kids are being sent home because they're feeling ill from breathing the oil-laden, full-of-volatile-organic-chemicals air in and around the school grounds. Though, you've got to wonder just what the air quality is like at home...

Chemicals that have been measured in the local air include benzene, toluene, hydrogen sulfide - stuff people shouldn't be breathing even at low levels. Unfortunately, most regulatory standards are set for healthy people in the workplace - not infants and children or elderly people who might be breathing polluted air 24/7 for as long as it takes to mop up the spill.

And these are just the current problems. Some of the chemicals will remain in the soil and waterways, only to be dredged up later, or end up in a kid's backyard sandcastle. I can see a new service industry emerging in this country: cleaning up pipeline spills, storm impacts, fire damage.... and fat pockets for the health insurance providers.