Back in October, Owego residents living near McHenry Road were surprised to see a well rig in their neighborhood. The well was drilled, the rig and truck traffic disappeared, and that was the end of it - or so people thought.


By late October, Carrizo had their exploratory data and were preparing to plug the well. That's when they noticed some bubbling. Gas was leaking between two of the casings.

This new information comes from a pair of DEC inspection reports obtained through a Freedom of Information request submitted by an Owego resident. It makes for interesting reading.

On Oct 25 the DEC inspector notes that gas was leaking at a rate of 15-20 cubic feet a day. The well operator, Carrizo was  concerned about Hurricane Sandy and proposed monitoring the gas leak. A couple weeks later, on November 13, Al Owings of Carrizo calls DEC and asks whether they can abandon the well with a vent pipe.

Notes from DEC investigator: "I told him that I did not know and that NY has no specific regulatory guidelines about the matter."

Now there's a rig back on the pad, and it appears that Carrizo is going to plug the well - the first real "Marcellus" well in Tioga County. Granted, it was a vertical well and drilled primarily to extract data, not gas. Vertical wells, while allowed under current permits, are not the most efficient way to exploit shale gas - but they serve well for exploring the new formations.

The Wetterling well was drilled to 4745 feet, not as deep as some of the wells around the area (some go deep into the Trenton Black River formation around 10,000 or so feet below the surface). There was no horizontal drilling, no hydrofracking. And yet it still sprung a leak. 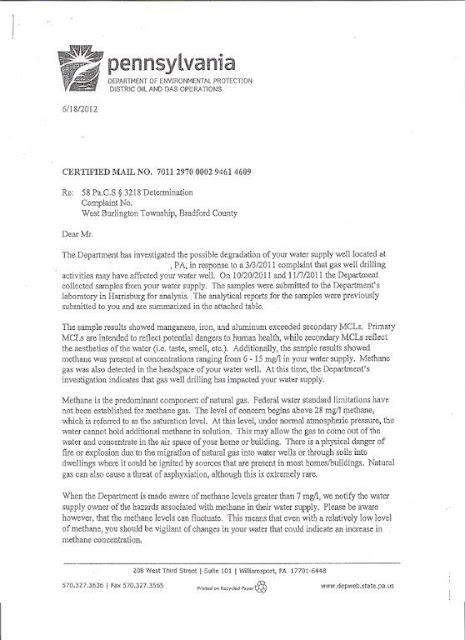 Methane leaks are not unusual for shale gas wells in Pennsylvania. In fact, citizen reporter Vera Scroggins recently compiled a stack of "Letters of Determination" from PA's Department of Environmental Protection advising homeowners that they have methane - and other contaminants - in their water wells, and that gas drilling activities in the area may have affected their water supply. This is not the kind of letter anyone living near a well wants to receive - whether they live in Bradford County, PA or Owego, NY.

Tom Wilber has posted more about this on his excellent blog, Shale Gas Review.

Posted by Sue Heavenrich at 2:01 PM