Fracking is Unhealthy for Children and Other Living Things 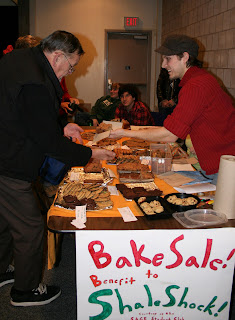 A hundred or so people filed into the Forum room at
Unlike the European Union, the US does not adhere to the "Precautionary Principle". That principle basically says that industry may not carry out operations that may potentially harm the environment or human health without first conducting tests to show their actions will have no deleterious effect.
Tomas Shelley, a chemical safety and hazardous materials specialist noted that when an industrial accident happens in the , it is the people affected by the pollution who must prove that an industry caused the contamination. By contrast, in the European Union the burden of proof falls on corporations to show that their products or procedures do not contain cancer-causing chemicals.

have to reveal the chemical make-up of their hydro-fracturing mixtures. Of the 207 fracking products listed by the NY Department of Environmental Conservation (DEC) in their draft Supplemental Generic Environmental Impact Statement (SGEIS), only 48  have even partial disclosure of their chemical constituents.
“The names of products really don’t let you know what’s in them,” Shelley said. For example, "Opti-Kleen" - that sounds like it could be used clean your contacts, he said.
Another problem is that many of these chemicals may cause serious health effects at low doses. One such chemical is  2-butoxyethanol, a solvent that affects the human endocrine system at doses as low as 0.02 parts per million.
Chemicals like 2-butoxyethanol are called endocrine disruptors. An endocrine disruptor is a man-made chemical that, when absorbed into the body, mimics hormones or blocks hormones disrupting the body’s normal function. It may change the level of natural hormones or stop production of hormones altogether. By changing the way hormones travel through the body, endocrine disruptors affect the functions that hormones control our health. Some of the problems that have been related to these synthetic chemicals include infertility, ADHD, autism, diabetes, thyroid disorders, and even childhood and adult cancers that have been found to be linked to fetal exposure to the chemicals. 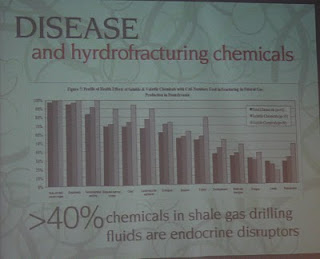 It takes only a small quantity of endocrine disrupting chemical to impact health said Adam Law, a physician who specializes in endocrinology. Concentrations on the order of parts per trillion are enough to alter gene expression. With concentrations so low and often no visible effects till much later – sometimes decades – it is hard to trace the chemicals causing the problems.
Law pointed to one study that showed 40 percent of the chemicals used in shale drilling are endocrine disruptors. Another problem is that fracking chemicals injected underground into the shale where the temperature is between 120 to 140 degrees, react, forming new chemicals such as trihalomethanes.
Given the complex chemistry of fracking, and the potential for chemical reactions underground, there needs to be more studies, Law said. He also said that it is time for the gas drilling industry to disclose what goes into their fracking fluids so state regulators can assess risk.
“We need to know what’s going into the ground and we need to know whether we can deal with the wastewater,” Law said.
But health is affected by more than the chemicals. Drilling activity and traffic create high levels of dust that will contribute to air pollution and respiratory problems of people living nearby. The diesel and natural gas emissions from trucks, compressors, pumps and other equipment contain a complex of benzenes, toluene, and xylene as well as other volatile organic compounds that contribute to respiratory illnesses such as asthma. Methane escaping from vents and flaring also contributes to the air pollution.
As with the chemicals underground, the pollutants in the air may combine to form new compounds. Diesel exhaust combined with nitrous oxides forms ground level ozone. Ozone in the upper atmosphere protects us from damaging ultraviolet rays, but at ground level it burns holes in the alveoli of lungs and in plant leaves.
See videos of the forum at Shaleshock