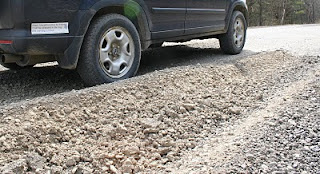 Ruts in Rumsey Hill Road near the Morey Road intersection.

Saturday a friend who lives in Van Etten invited me to drive up his road. "It's being ruined by the heavy trucks working at the well site up the hill," he said. The irony: those trucks are carrying the rock needed to fix up the well pad so the drillers can do their work.

So I drove up Rumsey Hill Road. It's still in good shape where it takes off Wyncoop Creek, where the sign says "Weight Limit 10 Tons". Over the past few years the Town highway department has been putting down oil and stone and, last year they'd just finished extending the improvements not quite to Shoemaker Road, but a good distance up the hill.

"It took only 8 days to ruin that road," said one of the Rumsey Hill residents. The constant pounding of heavy trucks destroyed the stone & oil surface, crumbling it back into dirt. And adding lots of ruts in the process. the ruts are so bad that a couple of motorcycle riders have bit the dust and the residents worry that fire and EMS vehicles might not be able to drive up in an emergency. 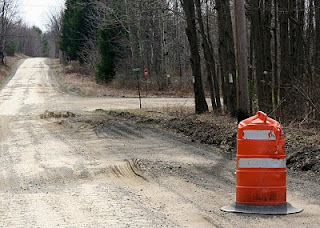 There's still a good portion of Rumsey Hill Road that remains dirt, with farms and residences along it. The ruts up near Shoemaker Road were so bad that the town put up markers cautioning drivers to avoid that section of road.

How deep are the ruts? Well, if you don't have four-wheel drive you could easily high-center your car or put a few dents in your exhaust system.

And this is what 8 days of truck traffic has done - the drilling hasn't even started yet, and this is for a vertical well into the Oriskany formation, not Marcellus. Though, to be fair, Epsilon admitted they have plans to go after Marcellus later, once the DEC sorts out the new regulations.

Epsilon has promised to pay for all road damage, but residents and EMS crews can't wait until the drilling is completed... so earlier today a town grader showed up and sliced the tops off the worst ruts, making the road passable. At least until the drilling starts.....
Posted by Sue Heavenrich at 4:49 PM