Does PA have air quality issues caused by gas drilling? 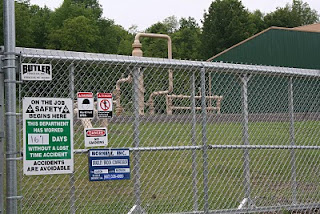 Back in February the mayor from tiny Dish, Texas visited a number of Upstate NY venues to talk about air quality problems associated with gas drilling.  Emissions from the high number of compressors in town have made some people sick.

Now it looks like PA may have a similar problem. This afternoon the PA Department of Environmental Protection (DEP) sent out a notice to the press that the agency is responding to odor complaints in two counties and will be analyzing air quality.

The DEP is gathering samples this week from areas near natural gas operations in Washington and Greene counties. The agency will conduct their study in four phases with each phase lasting one week. They hope to isolate the source of odors that have prompted complaints from residents.

"DEP has received complaints about odors that residents believe are emanating from gas well drilling facilities,” said DEP Southwest Regional Director George Jugovic Jr. Under the Air Pollution Control Act, any entity operating a source of odors may be fined up to $25,000. In the natural gas industry, compressor stations, which are located along natural gas transmission lines and pressurize gas so that it can be piped across great distances, operate under a general permit that limits pollutants by incorporating best available technologies.

During the first phase of the DEP study, their Mobile Analytic Unit will collect and compare air samples from a site in Washington County removed from active drilling as well as active drilling sites in Greene and Washington counties. DEP will also analyze air samples collected over a 24-hour period using 12 canisters, some of which will be placed on the properties of residents who have complained of odors.