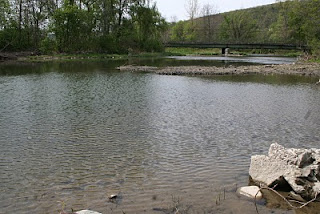 Back in January there was some controversy when the City sewage treatment facility accepted 35,000 gallons of mixed brine and frack fluid from the Ross well in the town of (). The vertical well, drilled 4950 feet into Utica Shale, was hydraulically fractured to release the natural gas trapped in the rock.
At that time, the president of the Canadian company developing the well said they planned to ask the city to treat flowback fluid created by future wells. He estimated that each well would produce from 35,000 to 40,000 gallons of brine and frack-flowback.
According to Brauchle’s report, Councilwoman Roxanne M. Burns moved that issue a formal declaration stating it will not accept the wastewater. The mayor backed Burn’s motion, but the three other council members voted to continue accepting drilling waste. The drilling company has asked the city to treat an additional 80,000 gallons of flowback fluid.
We are taking a huge risk of contaminating our beautiful lake and river for an amount of money that is incredibly small. I can't even believe that can be the right amount, $1,125 dollars? That won't pay a lawyer long enough to file a suit against the company if the pollutants get into the river and lake. Of course, by that time they are long gone anyway, it happens all the time. How many waterways do we ruin before we learn?
Posted by Sue Heavenrich at 4:55 PM