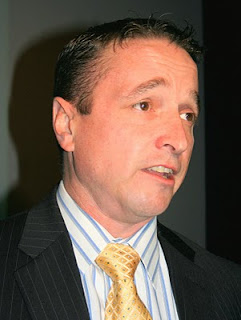 Dish, TX mayor Calvin Tillman headed to the northeast again to talk with residents living in the Marcellus gas fields. His visit just happened to coincide with Chesapeake's guided tours of their model well site near Towanda, PA.
Over the past few weeks, Chesapeake Energy has been putting extra effort into pitching Marcellus Shale development as a clean   path to energy independence. And one that will put big bucks into community coffers and landowner's bank accounts.
To improve the industry's image, Chesapeake invited elected officials, media and landowners to demonstrations of drilling operations last Wednesday and Thursday. According to press reports, Brian Grove (director of corporate development for ) met with several reporters at the company's field office in Towanda. He piled plates of sandwiches in front of them and then used a Power Point slideshow to help explain everything from drilling wells to job prospects. Then everyone piled into company SUV's and headed out to see a drill site.

On Thursday Antoine Thompson, Chair of the NY State Senate's Environmental Conservation Committee, went on the second of these "fact finding" trips. He had invited Calvin Tillman to join the tour. At the last minute Chesapeake called the Senator's office to dis-invite Mayor Tillman. Apparently they were advised by oil and gas attorney Tom West.


Fortunately Michael Lebron, who sits on the board of Damascus Citizens for Sustainability and some other groups, offered Tillman an alternative tour. Lebron took Tillman to locations in Bradford County, PA where water wells had been contaminated as a result of gas drilling activity. In each instance, Lebron says, there was a pattern of contamination: (1) tap water would turn black; (2) then it would acquire a foul odor; (3) and then methane levels increased to the point where homeowners could light the water on fire with a match.
These wells aren't all next door to the drilling - in one case the contamination occurred after a gas well was drilled one mile away. Tillman and Lebron rejoined the tour group for a visit with residents who have been severely negatively impacted by gas well drilling. Cabot, the driller in the area, has been found by PA DEP to be responsible for a number of large spills and for contamination of 14 water wells in Dimock.

After apologizing for excluding him from the Chesapeake tour, attorney West tried to get Tillman to endorse a "best practices" statement from the gas industry!

Tillman will return to the northeast late this year, to visit NY state legislators and possibly testify before the Environmental Conservation Committee. Assuming the NY State Legislature can pass a budget so they can move on to other business.....


Thank you to Mike Lebron for sending his report on the field trip.
Posted by Sue Heavenrich at 6:12 PM