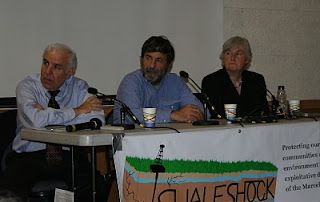 A couple weeks ago three area experts spoke in Ithaca about drilling waste disposal. One of these was attorney Rachel Treichler.


Even though horizontal drilling in Marcellus shale has yet to begin in state, some communities are finding themselves faced with questions about how to handle drilling waste. A couple Pennsylvania Marcellus wells are already sending their drill cuttings to landfills in NY and at least one municipal wastewater treatment facility is accepting drilling waste fluids from vertically drilled wells. Over the past year, representatives from EPA and Penn State have suggested that underground injection wells may be the "safest" method for disposal of frack flowback and brine from Marcellus wells.
Currently there are six active injection wells in NY, and eight in PA. , with 159 active state-regulated injection wells, is concerned about the amount of wastewater expected from increased Marcellus drilling; the state is considering a 20-cents/barrel tax on out-of-state brine.
The good news, says Treichler, is that local governments have some say in where disposal wells can be sited. That is, if municipalities already have such laws in place. If they don't, then "they should waste no time in developing local legislation to regulate disposal wells," Treichler says.
Injection wells are regulated by EPA under the Safe Drinking Water Act. In addition, DEC has its own list of criteria. While companies can drill a disposal well, a cheaper option may be to convert an existing deep well into an underground injection well. According to USGS geologist William Kappel (he's the guy in the middle), the geologic formations most likely to accept injected waste are the Oriskany and sandstones and the layer. But non-producing - wells make good candidates, too, as they have larger spaces for liquids to fill.

What hydro-geologists need to know, Kappel says, are how porous the formation is, how permeable the layer is, and the thickness of the layer. They also need to know the locations of abandoned gas or oil – or even drinking water – wells in the area before injecting waste, because any unplugged wells could provide a conduit for waste fluid to contaminate groundwater.
“It is important that they do an injection test prior to any sustained liquid injection and observe the limits of injection capacity,” Kappel stressed. In one case a company tied to inject too much fluid into their wells. As the wells filled, they increased the pressure. Eventually their injections set off seismic activity. 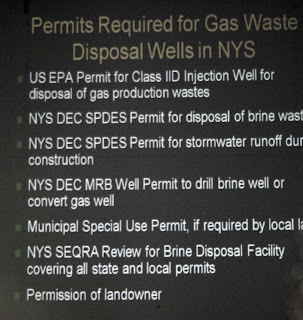 For the municipal officials attending the forum, the most encouraging news is that they have the power to regulate disposal wells. Before a company may drill a disposal well – or convert an abandoned deep well to that use – it must apply for a number of permits. These include: an EPA permit for a Class IID injection well; a DEC State Pollutant Discharge Elimination System (SPDES) permit for brine disposal; a SPDES permit for stormwater runoff; a DEC MRB well permit to drill a brine well or convert a well to that purpose;  a Municipal Special Use permit if required by local law; a State Environmental Quality Review (SEQR) for a brine disposal facility; and permission of the landowner.
“Municipalities may issue permits if their local laws require it or if zoning requires it” Treichler said. She encouraged all municipalities to adopt local laws without delay, as Marcellus drilling will produce a huge demand for disposal wells.
Posted by Sue Heavenrich at 5:37 PM