Radioactive Drilling Waste Coming to a Landfill Near You 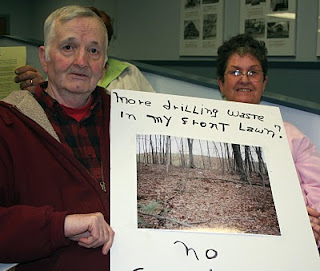 Last month the Chemung County Legislature voted to allow the landfill to accept more waste - an extra 60,000 tons a year. The landowners bordering the landfill have already complained about odor, noise, rats and the ever-increasing population of gulls.

And now families living near the landfill have one more thing to worry about: potentially radioactive drill cuttings from wells drilled into Marcellus Shale. "The county landfill is a municipal solid waste disposal facility," one resident pointed out at recent hearing. "It's not adequate for hazardous waste, and disposal of radioactive waste is not allowed in municipal facilities." In fact, he pointed out, if it weren’t for the exemptions the oil and gas industry enjoys, the drill cuttings and other Marcellus waste would be classified as “hazardous”.

The problem is that the Marcellus drilling waste contains radioactive elements: barium, strontium, radon. In fact, that's how drillers know they've found the Marcellus layer when they're drilling, explained one resident: the Geiger counter goes wacky.

Granted, the landfill has a liner - well, at least the more recent part of the landfill. But what happens if that liner rips? What happens if the heavy metals and radioactive isotopes leach into the surrounding soil or even the aquifer that lies only a few feet below the landfill? The resulting contamination could affect people far beyond .


Earlier in the evening Larry Shilling, a district manager for Casella (the company operating the landfill), acknowledged the lack of information about the levels of radioactivity in Marcellus drill cuttings. He passed out copies of a laboratory analysis that Casella had requested.
"The information we saw indicate radiation would not be an issue,” Shilling said. According to the Casella-commissioned study the level of radiation in the drill cuttings ranged from 2.1 pico Curies/gram (pCi/g) for Radium-226 to 14.2 pCi/g for Potassium-40. Background levels for local soil and rock are 0.9 pCi/g for Radium-226 and 24.1 pCi/g for potassium. Shilling emphasized that these levels fall below the EPA cleanup guidelines for unrestrictive use (5 pCi/g above background).
However another study conducted by Radioactive Waste Management Associates (RWMA) recommends against land-filling Marcellus drill cuttings and waste. Their analysis of rock cuttings from NY wells found Radium concentrations of 12 to 24 pCi/g or higher. Dr. Marvin Resnikoff, who authored the analysis, expressed concerns regarding the potential for radioactive isotopes to leach from the landfill, pass through the wastewater treatment plant and contaminate the .


Apparently the NY Department of Environmental Conservation wants to know more. Last week Gary Maslanka, environmental engineer from DEC Region 8 Division of Solid and Hazardous Materials, sent a letter to Casella requesting further information about some of the drilling waste they have accepted. Casella accepted waste from two spills at Marcellus sites in PA, and DEC wants analytical analysis of samples taken from the waste prior to its disposal. DEC also asked for a radiological analysis. Casella has until June 1 to respond.
Posted by Sue Heavenrich at 2:23 PM