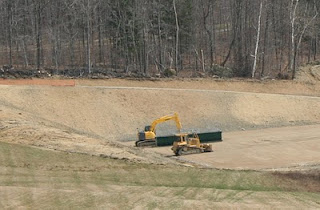 New York isn't allowing any horizontal drilling in the Marcellus Shale just yet, but that hasn't stopped some companies from planning ahead. Epsilon Energy is drilling into the Oriskany (just below the Marcellus layer) and at the last meeting with the Van Etten town board the Epsilon representative admitted that they were developing the pads and access roads for future Marcellus wells.

Over the hills, in the town of Maine, Inflection Energy has leased 3,000 acres for future Marcellus drilling. They told the press that they've signed leases for $6,000/acre with 20 percent royalties (minus "a few expenses"). All well and good for the landowners with leases, but what happens to people who are forced into drilling units through the process of "compulsory integration"?

Compulsory Integration assures that landowners involuntarily forced into drilling units will get paid for oil or gas taken from beneath their land - at the lowest royalty rate signed by a leaseholder in the unit, but no lower than 12.5 percent.

This practice does not sit well with most landowners who characterize it as nothing less than theft. So recently the NY Farm Bureau, goaded into action by landowner coalitions and outraged citizens, outlined some legislation changing this practice - and as of last week it looks like they found some sponsors in Albany. Assemblywoman Donna Lupardo introduced Assembly Bill 10956  (Senate bill 7758) that will, if it passes, provide "integrated" drilling unit landowners a royalty equal to the highest royalty in an existing lease in the spacing unit, but no less than 18.75 percent.

That, my friends, is a huge chunk of change!
Lupardo justifies her bill this way: When a natural gas drilling company applies for a permit from the Department of Environmental Conservation (DEC) to drill a well, the company proposes the drilling unit from which gas will be extracted. Unit boundaries may cut across property lines and include land owned by people that have not signed a lease with a gas company for development.


The gas company only needs to have 60 percent of the land in the drilling unit leased to drill. Any other land in the unit is forced in through compulsory integration. Of course - that only allows the gas company the right to suck up the gas; no surface rights are transferred through compulsory integration.
Now, Lupardo points out, the technical advances in the drilling industry and the prospect of exploration in the Marcellus Shale formation have pushed up both the rental and the average royalty payments dramatically. Royalty payments are consistently in the 18 to 20 percent range, with some lease agreements offering up to 30 percent royalties.

This means that landowners who are involuntarily integrated into drilling units now are receiving considerably lower royalty rates than their neighbors in the same unit. Landowners don't think that's fair. Now they've managed to convince Assemblywoman Lupardo. On May 5 her bill was referred to the environmental conservation committee. That means, should the NY legislature ever pass a budget, the bill might actually get read.
Posted by Sue Heavenrich at 4:47 PM