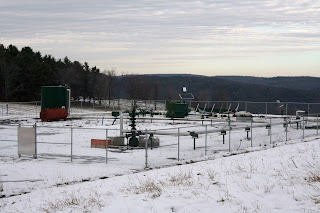 Last week the residents of Van Etten (Chemung County, NY) got some good news: Talisman USA (previously Fortuna Energy) is withdrawing their request to test the Mallula well for potential use as an underground injection well.


Back in October 2008 Talisman obtained a State Pollutant Discharge Elimination System (SPDES) permit from NYS Department of Environmental Conservation (DEC) that would allow them to conduct injectivity testing on the Mallula well. The well, drilled 9300 feet deep into Trenton-Black River (TBR), was no longer producing gas, so Talisman figured they might convert it to a disposal well.
The permit, good for six months, allowed the company to inject brine from neighboring TBR wells under pressure to determine whether the formation would accept the wastefluid. And if they didn't get around to running the tests, they had the option of renewing the SPDES permit every six months for up to five years.
And if the tests came out positive - indicating that the rock could accept well waste fluid - then Talisman would be able to apply for a permit to convert the non-producing Mallula well into an Underground Injection (disposal) well.last week, decided to discontinue with the testing.
Both DEC and EPA confirmed that Talisman will not be conducting any tests on the well.Company spokesman Mark Scheuerman said, “With our ever expanding operations in , and so many other development priorities, we simply felt that our focus should be there [in PA] right now.”  Though he claimed public antipathy toward the project had little to do with Talisman’s decision, Scheuerman was quoted earlier this year as mentioning public opposition as a reason for putting their testing on hold.

Talk to people on the town board and you get a different story. They learned of the plans for testing - and potentially converting the well into a disposal well - only after the SPDES permit had been issued. Town board members and residents were outraged that they had no voice in something that would have an impact on their town.

After a few fractious community meetings, Talisman put the testing plans on hold. They promised to notify residents before they commenced with the injection testing, and also promised to test well water for anyone in the drilling unit.

But their promises weren’t enough to mollify residents who were concerned that injection of brine and flowback might contaminate the groundwater supplying their drinking wells. And Talisman did nothing to address the concerns of landowners in the drilling unit who has explicitly deleted storage clauses from their leases. This is important because the Mallula well is horizontal and goes under those parcels with no storage clauses. The landowners firmly believe that while their leases allow for drilling and completion of wells, they do not contemplate the later use of the well for disposal of brine, frack fluid or any other liquid drilling waste.
But if not Mallula well, then where? According to EPA hydrologist Karen Johnson, underground injection wells offer the safest alternative for disposal of drilling waste fluids. The problem is that NY has only six active injection wells, so drillers have to truck their brine to one of ’s 159 state-regulated injection wells. Johnson predicts that, as the drilling increases, gas companies will “go back to depleted and unproductive wells and try to use them as underground injection wells.”
And she's not the only one thinking this way. "There is renewed interest in the (and other deep formations) as a potential site for underground injection wells,” says Tom Murphy, a extension agent in .
So even though the Mallula well has been checked off the list, there are plenty of other potential disposal wells in the area. Of the 146 TBR wells in NY, 62 are located in Chemung and . Most of these are horizontal wells, but nine are vertical – the same type of well was interested in converting to a disposal well in Pulteney earlier this year.
Posted by Sue Heavenrich at 12:53 PM