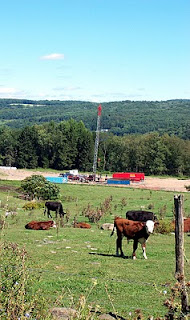 "If we knew then what we know now, we would have done things differently." At least that's the message from Sarah Fullenwider, a senior assistant attorney for Fort Worth, TX. Last month she shared her insights during a webinar.

Ten years ago, says Fullenwider, there were no gas wells in the city. Now there are 1,675 shale-gas wells within the city limits and over 100 brine disposal wells in the area. She explained that the  Texas Railroad Commission regulates drilling and safety issues, while towns and cities regulate quality of life issues such as noise levels and fences. Counties, apparently, have no regulatory authority.
Drilling began in the rural areas first, Fullenwider said. Then, in 2004, there was a sharp increase in the number of wells drilled, and drilling operations began moving into more populated areas. People were happy to receive $25,000/acre, but by 2008 those bonuses fell to a tenth of that: $2,500 – 5,000/acre. In addition, the public grew increasingly dissatisfied with noise, dust, traffic, lights, water usage and other environmental concerns that the city had neither predicted nor planned for.
The most important lesson Fullenwider stressed was that people need information. “You can’t educate your citizens too much,” she said, adding that she wishes Fort Worth had taken a more pro-active role in getting information to residents. Her recommendations: create a website, saturate the public with information, hold town meetings that bring together citizens, the industry and the regulatory agencies.
And make the landsmen register. Fort Worth residents who wanted to see the economic benefit of drilling became frustrated by the inequalities in leasing bonuses and royalties offered to different landowners.
In addition, residents are frustrated by their inability to control, through their municipal government, the location of wells. “We really need to deal with current and future land use,” Fullenwider said. Town governments need to get a better handle on industry’s need for compressor stations, disposal wells, pipelines and other infrastructure and integrate those needs with their town planning. Fort Worth had ordinances for  noise, lights, water use, truck traffic, setbacks, frack pits, landscaping issues, delivery times (of chemicals and equipment), and fences.
"But," said Fullenwider, "we could have required greater setbacks." And she felt the city should have established a baseline for ambient noise levels prior to the influx of industrial drilling.
Truck traffic and the resultant road impacts have turned out to be the biggest issue for . In addition to wear and tear on the roads, they felt a huge impact on traffic flow.Although requires a bond before drilling, Fullenwider feels a better solution would have been to implement a road repair fee.
“The two areas we missed early on were pipelines and compressor stations,” Fullenwider said. Now, pipelines are causing havoc in both the urban and rural areas around . The problem: companies don’t share pipelines. Furthermore, the pipeline company has power of eminent domain. And compressor stations, too, as they are considered part of the pipeline.
These are industrial facilities, Fullenwider emphasized. Towns need to establish setbacks for them, establish maximum noise levels, and establish containments such as fencing. “You need to establish ordinances because, while drilling is over in 40 days, the compressor stations are there for the long haul.” She also noted that disposal wells are becoming an issue.
Fullenwider stressed the importance for towns to develop a master plan for drilling and pipelines, as the 30 – 50 years of production will have an impact on the town’s growth. It also impacts environmental quality, she said, urging towns to to require “green completions” that minimize emissions from wells, compressors and pipelines. “Establish your air quality baseline early in the process,” she said, “and require routine inspections of all equipment.”
But most of all, Fullenwider said, require an Environmental Impact Statement for each well.
Posted by Sue Heavenrich at 11:50 AM