this post has been corrected
This past week’s excellent "Drilling Down" series in the New York Times has done a lot to focus media attention on problems associated with industrialized drilling and hydraulic fracking in Marcellus shale. Meanwhile people living in drilling-impacted areas continue to live with exploding condensate tanks (most recently the MarkWest compressor in Washington County, PA on March 1), leaky gas pipelines and contaminated drinking water.
The problem, say residents living in those areas, is that news stories fail to accurately reflect what is happening. Take Dimock, for example. Dimock, lest you’ve forgotten, is a sleepy hamlet just south of Montrose in Susquehanna County, PA. 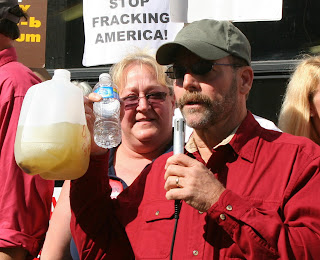 Instead of quiet wishes for a prosperous New Year, the first day of January in 2009 opened with a bang for some residents. A gas well explosion blew off a well cover, alerting residents and regulatory officials that there was a problem underground. Less obvious were the bad cement casings in several wells in the area, poorly constructed casings that allowed for methane migration and contamination to  private wells that provided fresh drinking water to about 14 families.

After investigating, the PA Department of Environmental Protection (DEP) ordered Cabot, the company responsible for the wells and the explosion, to provide a permanent solution for getting water to the affected homes. Little happened and last fall DEP promised to build a water line to provide residents with fresh drinking water, at Cabot’s expense (an estimated $11 -12 million).
Cabot balked. Taxpayers in neighboring Montrose, worried that they might have to foot the bill to share their water with the waterless, balked. And finally, in December of 2010 – two years after their water went bad – DEP bailed. They compromised, allowing Cabot to "promise" payments totaling $4.1 million to the affected residents.
The media, says Victoria Switzer, makes it sound like the affected homeowners reached an acceptable resolution to the water problem. But it’s DEP that’s reached a resolution with the gas drilling company. Switzer explains that DEP and Cabot Oil and Gas concocted the deal behind closed doors – a deal that replaced the promised and approved water line with silver.
The media reported that the issue was resolved with a consent order. But, says Switzer, “We were not consulted or included in this agreement.” The consent order, she points out, was simply an arrangement between DEP and Cabot’s lawyers.
“There is not a family among us that would not benefit from that money,” she says, “but we recognized the offer for what it was...a bribe. It was a gross underpayment for properties that sit in the middle of the affected area. It discontinues our water delivery and leaves us to solve the water problem on our own.”
Today, twenty-six months after the initial explosion, these residents are still without water. They rely on delivered boxes of water and water buffaloes. If they take the money, the water delivery stops. With no water, they can’t sell their property – except for a fraction of its value. With no money, they can’t move.
And where would they move, anyway? Refugees from contaminated shale areas are having a tough time finding houses to rent – the price of housing has skyrocketed in the past year. Then, too, with the intensity of industrialized drilling in the area there’s always the risk that any new house they buy could end up with a gas well in the back yard – or methane in the drinking water.
Posted by Sue Heavenrich at 2:26 PM