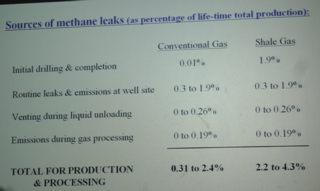 Cornell professor Robert Howarth reports that emissions from shale gas development are much higher than conventional drilling and likely to aggravate global warming. Working with Tony Ingraffea and Renee Santoro, Howarth spent the past year calculating the total contribution of greenhouse gas emissions generated from unconventional drilling. Their research will be published this April in the peer-reviewed journal, Climate Change Letters.
A couple weeks ago the researchers discussed the numbers behind their findings during a lunch-hour seminar. Although no one has definitively calculated the contribution of greenhouse gases from gas drilling, their numbers show a big difference between conventional and unconventional drilling. Turns out that drilling shale gas wells puts anywhere from 30 percent to twice as much carbon into the atmosphere as conventional gas wells. 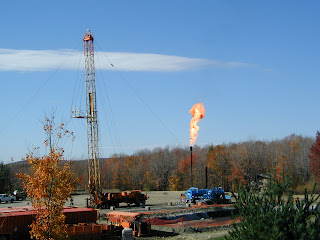 That’s because unconventional gas wells are bigger, says Ingraffea. Longer horizontal wellbores mean more drilling time and heavier drilling equipment, which means burning more diesel. Add to that more fracking stages and more cement plugs in the horizontal bore – plugs that must be removed before the gas flows.
Bigger wells also mean more flowback and more produced drilling fluids. And at every one of these stages carbon is lost, mostly in the form of methane that released into the atmosphere either through venting or by flaring.
The Cornell team used data from Chesapeake wells drilled in Pennsylvania Marcellus shale to characterize a “typical shale gas well”. Then they determined how much carbon was emitted from each stage of drilling and production.
Carbon dioxide emissions are important, Howarth said, but methane is a more critical problem. Natural gas is 85 to 95 percent methane, a far more potent greenhouse gas than carbon dioxide. No one has measured actual methane emissions from gas wells throughout the various stages, so the Cornell relied on data from the gas industry, the General Accountability Office and EPA.
“A shale gas well can lose up to 3.2 percent of its lifetime production of methane in the first 12 days,” Howarth said. The amount of gas vented during initial drilling activities varies with the rock formation, so the team calculated an average using industry data from five different formations.
Even with their conservative estimate, the Cornell researchers figure that 1.9 percent of a shale well’s lifetime methane production escapes during initial drilling and completion. For conventional gas wells that figure is 0.1 percent. That difference, says Ingraffea, is due to hydro-fracking. 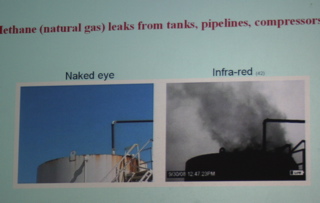 Once a gas well begins producing, gas continues to leak at the well site, said Howarth. This holds for both types of wells, with little difference between the two. Additional methane is lost during processing, and even more when gas is vented from storage tanks and lost from pipelines. Just how leaky are Amaerica’s aging gas pipelines? According to Texas companies operating in the Barnet shale, 3.6 percent of the gas shipped through pipelines never makes it to the end consumer.
When you tally up all the numbers from drilling to production to transport, something like 3.6 to 7.9 percent of the gas from a shale well disappears into the atmosphere over the lifetime of the well. That amount is 30 percent to two times greater than the amount lost during conventional gas production and development.
All the methane that is vented and flared during gas drilling ends up in the atmosphere where it contributes to global warming. The question, Howarth explained, is how to translate methane emissions into “carbon dioxide equivalents” Previously, scientists multiplied the amount of methane by 21. The Cornell team believes that multiplier should be much higher. Their conclusion: shale gas contributes twice as much greenhouse gas as coal.
You can see their slides here.
Posted by Sue Heavenrich at 8:24 PM