Living in the Drill Zone

Two years ago faulty cement casings of gas wells in Dimock, PA led to the contamination of water wells in one part of town. But the impact of drilling goes far beyond that, Victoria Switzer told a small crowd in Binghamton NY on Monday night, March 14.
Residents often don’t even know about spills nearby. Switzer related one incident when drilling mud spilled into a small stream that crosses her seven-acre wooded plot. “We found out about it months later,” she said. “My children could have been playing by the water and we would never have known about the danger.”
Switzer is one of the residents living in Dimock’s “affected area” – it’s an official designation by the Department of Environmental Protection (DEP) she said. After her neighbor’s well exploded, Switzer and others noticed methane in their water. She showed a graph plotting the peak methane levels in the groundwater that she and her neighbors depended on for drinking, cooking and washing. 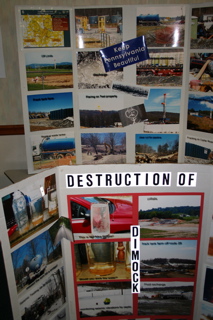 Cabot Oil and Gas, the company responsible for the gas wells, supplied affected homes with drinking water, filling large plastic containers called “buffaloes” and providing bottled water for drinking. But the families continued using their well water for other things. Then, 15 months later in April 2010 Switzer noticed that her groundwater looked “soapy”. She asked an independent lab to run tests and the results showed ethylene glycol, propylene glycol and toluene present in her well.
“I was lucky that I tested my water before they began drilling,” Switzer said, so she had data to back up her assertions that prior to the explosion her water was methane-free. Water tests don’t stop contamination, but they provide evidence that, in the case of Dimock residents, was needed to compel the gas company to provide drinking water.
The problem, Switzer says, is that we can’t live on bottled water for the rest of our lives, and the PA DEP isn’t forcing the gas company to provide a permanent solution to the neighborhood’s water woes.
“Cabot boasts that they created 400 jobs in Susquehanna County,” Switzer said. “Twelve of those are people who deliver our water.”
This post is taken from a longer article about the importance of water monitoring published in the March 17 issue of Broader View Weekly. You can read BVW online at www.broaderviewweekly.com; gas articles also archived at www.tiogagaslease.org/broaderviewweekly.html
Posted by Sue Heavenrich at 9:44 AM