Judge to Dimock: No Soup for You

Last Friday Pennsylvania Environmental Hearing Board Judge Bernard Labuskes Jr. told the Carter Road residents that they would not see future water deliveries. At least not until they have allowed Cabot Oil & Gas to install “whole-house gas mitigation” systems for their wells.
When the water shipments were canceled twelve days ago, the 11 families depending on delivered water appealed to the PA Environmental Hearing Board. They argue that the state is wrong in ignoring the harm that could come from drinking contaminated water. It’s more than methane, say the Carter road residents. Their water contains metals and volatile organic compounds including solvents and manufactured chemicals at levels higher than state and federal standards. 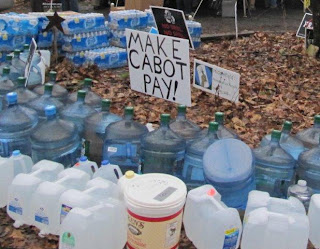 Of course, Cabot and the PA Department of Environmental Protection (DEP) submitted their own arguments, noting that the Environmental Hearing board doesn’t have the authority to force the driller to continue deliveries of drinking water. Nor does it have the authority to order DEP to take enforcement action.
So where does that leave the Carter road folks? With empty water tanks. Because, as some of them have told the press, the treatment system Cabot is offering only targets methane, not the other toxic contaminants. And what they want – despite the political bickering and nasty comments from the “Enough Already” crown – is their water back. They want good, clean water to drink – or make soup. Not a wad of cash.
Posted by Sue Heavenrich at 8:21 AM