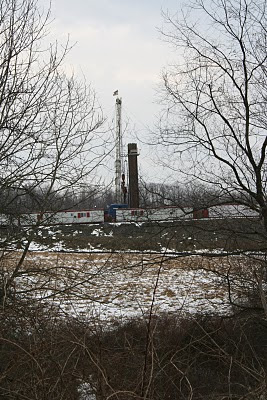 In an email to the local press yesterday, Department of Environmental Conservation (DEC) spokeswoman Emily DeSantis remarked on the agency’s need for additional funds for regulating hydraulic fracturing and gas drilling. Apparently those funds “will not be included in the executive budget” – the budget Gov. Andrew Cuomo will propose around mid-January.
That’s about the same time that DEC should be getting down to the business of reading through the thousands of public comments regarding the draft Supplemental Generic Environmental Impact Statement (SGEIS). And the proposed regulations for high-volume horizontal hydraulic fracturing.
Wayne Bayer, a DEC engineer who is shop steward for the Public Employees Federation union, said the agency is understaffed and its employees are concerned about adding a new regulatory program like hydrofracking.
At this point the DEC estimates it will need 140 new workers for the first year permits are issued and 226 by the fifth. Add salaries to the cost of needed equipment and you’re looking at an additional $20 million a year.
Where will that money come from? Right now DEC has convened a panel of outside experts to develop a list of fees and taxes that could be levied on drillers to cover the costs. That panel should be issuing a report “sometime in the first part of next year,” says DeSantis.
But it’s going to be tough to sell the need for additional staff when Cuomo has already required all state agencies to cut 10 percent from their budgets for the current fiscal year, and is looking for an additional 2.5 percent cut for 2012-13.
What to do? Ask the industry to pay for the services it uses. Jim Smith, a spokesman for the Independent Oil & Gas Association of New York (IOGA-NY), is confident the money will come into the state once DEC gives drillers a green light. “We support more DEC staff,” he told the press. Once drilling starts there should be enough revenue through permitting and other fees to “more than pay for that staff.”
Posted by Sue Heavenrich at 9:17 AM