What happens when gas drilling and organic agriculture collide? This series considers some of the issues. Posts are drawn from a 3-part series originally published in New York Organic News (NOFA-NY) in 2012. Research was supported with a grant from SEJ's Fund for Environmental Journalism. 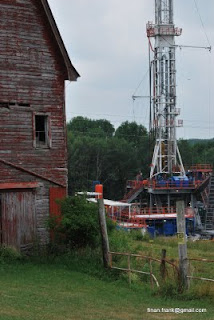 In June 2012, the Pennsylvania Association for Sustainable Agriculture (PASA) asked the governor and legislature of the Commonwealth to place a moratorium on unconventional gas extraction. Like NOFA-NY, they asked that hydrofracking be halted until studies could determine that the industrialized drilling practice will not harm farms, the food they produce and the people who eat that food.

Both NOFA-NY and PASA call for the federal government hold the oil and gas industry to the same environmental regulations as other industries – currently drillers are exempted from the Clean Air Act, Clean Water Act, and Safe Drinking Water Act. Both organizations call for drillers to report publicly what chemicals they are using, and to be held accountable for negative impacts.

As far as certification goes, NOFA-NY allows organic farmers to lease their land for drilling – as long as they provide a “safe” buffering distance between drilling activity and their organic fields.  But how close is too close when it comes to growing food near a gas well?

For Adron, that distance ended up being a quarter of a mile. He and his wife leased land just south of Dimock, PA, where they grew organic vegetables for a CSA, farmers market and local restaurant. Just one month after they moved in, a well was drilled half a mile away. A year later another well was drilled, this one a quarter mile away and located uphill from the farm. The family experienced headaches, burning eyes, and hives. It often smelled like a mix of bleach and diesel, said Adron. But he hoped those problems would disappear once the drilling ended.

Then, in the summer of 2011 his well water changed color. The family used spring water to drink and cook, but they depended on the well for irrigation and washing the produce. “I never sold anything I didn’t eat myself,” he said. “But there’s an emotional weight of trying to grow pure food and fearing that it might be contaminated.” By the time their well cleared up, they had decided to leave PA.

“We want to farm where we don’t have to wonder about the safety of our water,” Adron said.

Shale gas drilling is deeply dividing the farming community in Pennsylvania and surrounding states, and those divisions are showing up in the organic community as well. Pittsburgh-based journalist and filmmaker Kirsi Jansa has been documenting “Gas Rush Stories”, and her latest installment (below)  focuses on the uncertainties and risks facing Pennsylvania’s organic farming community.