What happens when gas drilling and organic agriculture collide? This series considers some of the issues. Posts are drawn from a 3-part series originally published in New York Organic News (NOFA-NY) in 2012. Research was supported with a grant from SEJ's Fund for Environmental Journalism. 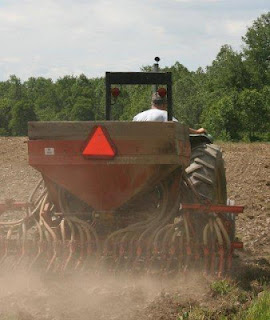 Two years ago the Park Slope Food Co-op publicly stated that if hydro-fracking were allowed in New York, they would “research alternatives to New York State products.”  The 15,800-member retail food cooperative purchases more than $1.5 million in New York State fruits and vegetables and another $1 million in poultry, beef, lamb and pork. They also purchase NY-made yogurt, cheese, eggs, cider and milk and take their responsibility to “buy local” seriously.

Fracking – even if it weren’t on the producer’s farm – would be a deal-breaker. One that, says NOFA-member Ken Jaffe, would have a dramatic effect on his farm.

Jaffe raises grass fed beef on hilly pastures in the Western Catskills. Slope Farm is situated on 100 acres in Delaware County, located near the headwaters of the Susquehanna River and just outside the “no fracking” buffer zone protecting the NYC watershed. He leases another 300 acres of pastures and hayfields and contracts grazing with other farmers. Some of his beef ends up at the Park Slope Co-op and other NYC markets, so Jaffe takes extra care to ensure his cattle are raised well away from drilling areas. But what happens when drilling moves into an area?

That’s not a rhetorical question for Jaffe. Just a few months ago he began negotiating a two-year grazing contract with a Tioga County farmer. But at the end of September, Houston-based Carrizo Oil and Gas started drilling an exploratory Marcellus well in Owego, NY. Now Jaffe’s re-thinking that contract, especially since Governor Andrew Cuomo has already indicated that he’d allow horizontal hydro-fracking Tioga and four other Southern Tier counties.

The primary concern for Jaffe’s buyers is what’s in the meat. “No one at the regulatory level is investigating this,” he says, disbelief in his voice. He cites the Pennsylvania case where 28 cows were quarantined after exposure to drilling fluids. No one, to his knowledge, has looked for any chemical residues in those animals.

The proximity of gas drilling chemicals and waste fluids to food production raises questions about the safety of grain and vegetables as well as the meat, eggs and dairy products. Not only is there no federal funding for research on the impacts of chemical contamination on food, there are also no required tests for contaminants.

Testing won’t make much difference, though, if there’s a perception that food comes from a contaminated place, says Stefan Senders. Two years ago he started Wide Awake Bakery in upstate NY. Production is small – between 500 to 700 loaves a week – but the focus, Senders says, is to nurture a local economy. One neighbor grows the organic grains, another neighbor mills them, and Senders bakes them into wholesome loaves.

“The wheat, the flour, and the bread are wholesome,” says Senders. “They bring our communities together, give us work, nourish us, and make our bodies and our land healthier.” Fracking threatens that because bread needs water, Senders explains. His rye flour requires nearly equal proportions of water and flour, and the purity of that water is critical. “What happens if you put your second ingredient at risk?”

Should drilling contaminate local wells, Senders could truck in water. But no farmer can afford to truck in irrigation water, he says. And without local grain, what’s a miller to grind? The illusion, says Senders is that you only need to fix one thing – maybe bring in water. “But when you frack, eventually everything fractures.”
Posted by Sue Heavenrich at 12:30 AM