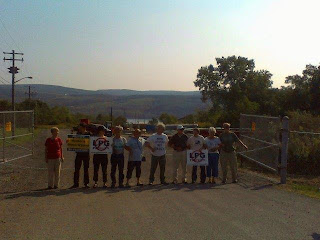 On June 28, Jeremy Alderson chained himself to the gate of the Inergy gas storage facility in Watkins Glen, NY. Alderson, who lives in Hector and publishes the “No Frack Almanac, was arrested earlier in the year for a similar protest. But, the veteran protester said, “Nobody voted for this [converting the salt mine to gas storage]. Nobody was consulted about this; it’s just being imposed on us from outside.”

At issue is a plan to store liquified gas in salt caverns beneath Seneca lake – caverns which have been declared structurally unsound and prone to catastrophic accidents. More than 100,000 people depend on Seneca Lake for their drinking water, and an accident would pollute that vital resource.

Local wineries, businesses, and community members have expressed dissent over DEC’s less than stellar review of the potential economic and environmental impacts of Inergy’s proposal to expand the gas storage capacity of the facility from 1.5 to 10.0 billion cubic feet. Local municipal elected officials are deaf to the pleas of constituents who are concerned about the potential effects of the gas storage project. So Alderson, and a few others who have brought their grievances to their electeds, are left with few options. 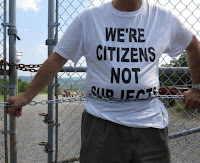 Alderson chose to chain himself to the gate and undergo a second arrest. But this time, the gas corporation decided to try something new: to prevent Alderson from further protests by filing a restraining order against him.

A “restraining order”, also called an “order of protection” is a legal injunction that requires a party to do, or to refrain from doing, certain things. Such orders are commonly used in cases of domestic violence, harassment, stalking or sexual assault to protect an injured party. However, courts are starting to use restraining orders to muzzle protesters. Peaceful protesters. Non-violent protesters.

Here is Alderson's report of what happened in court yesterday (August 1):


I went to court again today, this time in the Cayuta Town court, where the case regarding my second arrest is now being heard.


Everything was as routine as I expected it to be, with me pleading not guilty and my lawyer, Jerry Kinchy, saying that he would be filing motions prior to trial.  Then, out of the blue, the assistant district attorney made the request that an order of protection be granted, restraining me from appearing at the Inergy site.


Jerry objected that an order of protection can't be issued on behalf of a corporation, but only on behalf of an individual.  The D.A. argued that the order should be issued restraining me from being near Barry Moon, who he said was the manager of the Inergy facility (a different gentleman, identified, I believe, as Inergy's "site manager," testified against me at my first trial, not Mr. Moon).  I should be kept away from the Inergy facility, the DA said, because it is Mr. Moon's place of business, and of course, I shouldn't be allowed to contact him or go near his residence.


I told the judge that I did not know Mr. Moon and would not know if he was standing beside me, which would make compliance with this order difficult. The judge, Robert E. Johnson, said I should stay away from the Inergy facility and wrote out the order.  As a result, I am now barred from being anywhere within 100 feet of the Inergy fence.  I am also barred from "third party contact," meaning that I can't tell anybody to go to the Inergy site for any reason, including for a peaceful protest. The judge made it clear that violating this order would be a misdemeanor and a higher level of seriousness than what I am facing now.


Leaving aside the fact that I am in some danger of accidentally violating this order because I don't know where Mr. Moon's residence is and I still wouldn't know him if I saw him, there are much more serious issues here.  For one thing, I have, effectively, been given a punishment before my case has even been heard, and that sure doesn't seem right.


A restraining order is understandable when issued to an accused batterer, but it's a very different matter indeed when it becomes the mechanism for taking away someone's right to freedom of speech, especially when no evidence was even submitted to the court that my actions had done harm to Mr. Moon or anyone else.  In fact, the law (NY CPL 530.13) states that the court "may for good cause shown" issue such an order, but no cause -- good, bad, or indifferent -- was offered in court today.


My wife keeps wondering aloud whose idea this was and she suspects that it was Inergy's attorney who suggested it to the D.A.  We can't know, of course, but could a Schuyler County D.A. have come up with this novel legal theory on his own without prompting?


Yes, I know that in a day and age when our president claims he has the right to kill American citizens without trial, it's just kind of quaint and old-fashioned to care about the Constitution, but I do care.  And I simply cannot remember anything in the Constitution giving the government authority to forbid free speech if there is a risk that it will upset or inconvenience a corporation.

Posted by Sue Heavenrich at 5:32 PM