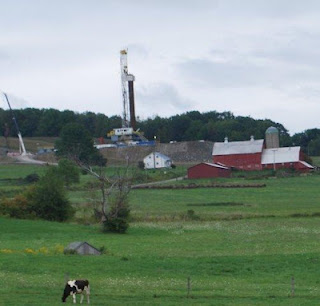 Back on July 9 Greg May, senior vice president of Tompkins Trust Company Residential Mortgage lending, warned residents in Berkshire, NY that gas drilling can bring high costs to landowners. One of his biggest concerns: that “homeowners insurance normally excludes coverage if there are active commercial operations occurring on the property.” Gas drilling falls into that category.

Now, barely a month later, a landowner in the town of Lebanon (Madison County, NY) is facing just that situation. According to Jim Goldstein, town supervisor, the landowner was surprised when his insurance company denied the renewal on his homeowner's insurance policy covering their home and farm because there is a gas well on their property.

There are no problems regarding royalty payments, nor have there been any incidents on the property. The gas royalties go to the previous owner, but the current property owner holds the lease and royalty rights for future wells.

So Goldstein checked out the situation with the insurance agent, who writes a lot of policies in the county. Apparently this is a “new trend that will come up as property owners fill out renewal applications,” writes Goldstein.

But, continues Goldstein, “we will have to see how this develops. Initially, we thought it was limited to one company but it turns out it is a trend, and given how many property owners in Lebanon have gas wells on their property, some dating back to the 1960s, this present a tremendous potential problem as those individuals would not have insurance liability coverage and will be exposed, not to mention have great difficulty persuading others to buy their property when they are ready to sell.”

The case in question is on a property where the buyers inherited the gas well and lease from the previous owner. Goldstein worries that other farmers and homeowners may be facing similar insurance problems. Of further concern, he notes, is that the state Department of Environmental Conservation – which oversees and regulates gas drilling – is not aware of this trend. And, says Goldstein, state officials know of no “high risk pool” available to homeowners should they lose their insurance because of gas wells on their property.

“This appears to be directly related to perceived liability of having a gas well on one’s property,” says Goldstein. “And we are talking about Medina and Herkimer Sandstone formation wells, not the new proposed high volume hydraulic fracturing process.” He estimates that 25 percent of Madison County is leased, with about 60 wells in his town of Lebanon.

“If this becomes a widespread practice, this will change the discussion significantly in the upstate region about gas drilling and development,” says Goldstein. He doesn’t know whether insurance companies will respond in a similar fashion to homeowners with gas infrastructure, like pipelines or gathering systems on their properties. But, he says, “this could have significant and profound implications for property owners and municipal governments where gas wells currently exist or are anticipated.”

Read more on insurance and drilling here.
Posted by Sue Heavenrich at 4:37 PM