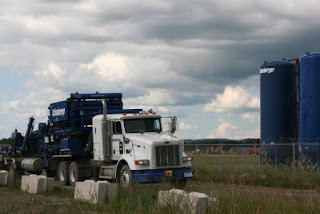 Since July, and throughout three public hearings, residents of Horseheads, NY and the surrounding area have been asking the village elders to conduct a more thorough environmental review of the proposed Schlumberger building project.

Last winter Schlumberger Technology Corporation plunked down a chunk of change for 88 acres in the Horseheads Industrial Center. It is an area zoned for light industry and manufacturing and contains warehouses and distribution centers. There is also another gas field service industry on the site - a company that provides equipment needed for drilling.

Schlumberger hopes to construct a 400,000 square foot facility to store fracking chemicals and explosives needed for gas field development. And they claim that their facility will bring 300 to 400 jobs to the area.


But residents are concerned that local municipal officials have embraced potential economic gain at the cost of potential environmental contamination. During the public hearings they repeatedly expressed their concern to village board members that it seemed like the project was a “done deal”. They begged the town board to conduct a more complete environmental review.

In particular, residents raised questions about stormwater permits, air quality and the impact of increased truck traffic on adjacent schools and residential neighborhoods.

At one point the Horseheads Village board seemed to agree; during their review of Part I of the environmental assessment (at their September 30 meeting) they  determined that the Schlumberger facility could potentially impact ground and surface water quality, air quality, wildlife and public health and safety. Less than a week later, the Village determined that there was no need for further environmental review, and on October 15 they issued a “negative declaration.”

This decision cleared the way for site plan approval and outraged many local residents. Outraged them so much that on November 12 a group calling itself People for a Healthy Environment filed a lawsuit against the Village. They claim that approval of the Schlumberger project was “illegal, arbitrary and capricious” and ask that the project be halted until more a complete environmental review can be done.

Horseheads Village didn’t just give a deaf ear to the people. They – and Schlumberger –also ignored demands from the state Department of Environmental Conservation (DEC) to cease activity on the site until certain requirements had been met. 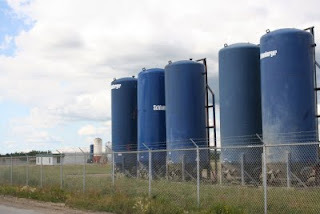 Since summer Schlumberger has been operating on the site, with permission of the Village. They have a temporary structure, chemical storage silos as well as trucks parked on the site. Still, Schlumberger insists that what they are doing is not "construction" and therefore requires no permits.

The NY Department of Environmental Conservation (DEC) is not amused. On September 30 the DEC issued a Notice of Violation to Schlumberger for failure to obtain proper permits for stormwater discharges. You see, stormwater from the Schlumberger site discharges into a NY state freshwater wetland and into Catherine Creek, which eventually spills into Seneca Lake – precisely the concern raised by residents at board meetings and public hearings.

Schlumberger’s response was to continue their activities at the site. Until recently. It took another letter from DEC, but according to Peter Lent, regional permit administrator for DEC, as of November 13 Schlumberger is honoring the cease work directive.

In the meantime they are trying to get a stormwater permit for their temporary site.

It won’t be easy. In an 8-page letter to Schlumberger, DEC listed a number of things Schlumberger needs to clarify before a permit will be issued. Schlumberger needs to make sure chemicals are stored correctly; an October 15 inspection revealed a tarpaulin roof leaking water onto chemicals stored on pallets. It also cited chemical and additives dust on the storage building floor.

DEC has also requested Schlumberger to be more forthcoming about the chemicals stored on site. Instead of lumping them together in a broad category, such as “dry additives” they will need to list the components of the mixture.

As for the citizen lawsuit, the group expects a response from village officials sometime in December.

You can read about the October public hearing here . You can read more articles about Schlumberger here.