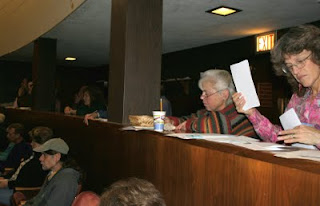 It was standing room only (or close to it) in the James Law Auditorium at Cornell's Vet School last Thursday (Oct 29) when more than 200 people showed up for a forum on "Legal Issues for Landowners. The forum was co-sponsored by Shaleshock Citizen Action Coalition, Cornell Cooperative Extension, and a host of others including local Assemblywoman Barbara Lifton.

Four attorneys addressed issues of gas leases, property law, pipeline easements, compulsory integration, and landowner coalitions. One of the things that still seems to stymie landowners is that when they sign a lease with a gas company they could be creating a "title defect".

"The severity of the defect depends on what you ultimately want to do with your land," said attorney Randy Marcus. A typical gas lease goes far beyond allowing the gas company to drill; they can build access roads to their well pad, take trees (timber), erect fences, put up buildings, and construct pipelines if you don't negotiate limits to these rights, Marcus said. He pointed out that most banks won't put a mortgage on a property with a lease. If a family purchases country acreage for their dream home, and the previous owner had leased the mineral and surface rights to a gas company, the home-in-the-country dream may not get financed.

Another issue Marcus raised is homeowner liability and insurance. "Accidents happen," he said, and noted that a number of insurance companies will not insure properties with a lease. Others have substantially increased their premiums.

While DEC's new draft rules for drilling the Marcellus (dSGEIS) takes up a lot of pages (809) it does "virtually nothing to protect the value of your property," said Marcus. Right now the gas companies can drill a well as close as 100 feet from your home. "That's five pick-up trucks parked end-to-end," Marcus said. "Not what the average homeowner expects in their backyard."

Attorney Jane Welsh agreed with Marcus. Later in the evening she said that DEC "doesn't really have protection at heart" of their dSGEIS. She feels the environment is getting the short end of the stick and urged landowners to submit comments on the dSGEIS. She also emphasized the importance of conducting baseline water testing, in case well water becomes contaminated through drilling or spills.

Attorney Helen Slottje addressed the issue of pipeline right-of-ways. The message of the night: there will be a lot of them, and nobody is coordinating where they go. Without some sort of oversight the pipeline right-of-ways will slice through forest and farmland. clarification: the discussion was in reference to gathering pipelines that go from wells to compressor stations and the large pipelines, such as Millennium, that transport gas to market.

Slottje also raised the question: what would happen if landowners got together to create a coalition of folks who refuse to lease their land? To form a drilling unit a gas company must have 60% of the land under lease - they can incorporate any hold-outs through "compulsory integration" - more on that tomorrow.

But, said Slottje, what if landowners joined in solidarity to keep acreage unleased? If they got enough acres they could effectively stop the drilling in their area.
Posted by Sue Heavenrich at 8:38 AM