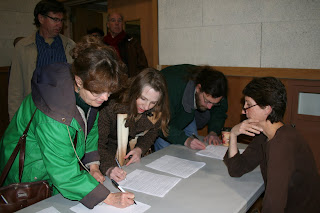 This is a busy time for board members and other municipal officials in Upstate NY. They've got til the end of December to submit their comments on the NY Department of Environmental Conservation (DEC) draft Supplemental Generic Environmental Impact Statement (SGEIS) regarding horizontal drilling and hydraulic fracturing in Marcellus and other shales. This is not a trivial pursuit; the Town of Danby's comments spread over 20 pages.
But even as public officials try to beat the comment deadline, thousands of others are calling on Governor Paterson to withdraw the SGEIS.  Last week over 100 people attending a meeting in Ithaca signed on to the letter, and they're hoping to get another couple thousand over these next few days.
Their reason? The SGEIS presumes that the 1992 Generic Environmental Impact Statement for oil and gas drilling - a document that took over a decade to produce - adequately protects human health and the environment.
But it doesn't, says Walter Hang of Toxics Targeting. The current regulations fail to adequately safeguard citizens against impacts on water quality, land use, economic and cultural resources and wildlife - and he has 270 cases of spills and accidents to prove it.
Regulations for current gas wells aren't protective enough and the industrial nature of drilling in the Marcellus will create multiple opportunities for even more environmental problems. The SGEIS would allow huge impoundments for flowback and brine - and already PA's Department of Environmental Protection (DEP) has slapped a couple corporate wrists for poorly engineered impoundment structures.
Then there's the problem of wastewater. “Where will it go?” Hang asks. Public wastewater treatment plants in NY aren't equipped to deal with the high levels of dissolved solids in the brines. Nor are public treatment plants set up to deal with the radioactivity expected to be in Marcellus brines. Instead, NY drillers have been transporting millions of gallons of brine and well wastewater to Pennsylvania and Ohio. But at the last DEC hearing in Corning a Pennsylvania man said, "don't send it to us. We don't want it."
“The bottom line,” says Hang, “is that the [NY] government is not safeguarding your public health and safety. That's why he is actively circulating the petition that asks Governor Paterson to withdraw the SGEIS. "That action will allow the de-facto moratorium on drilling permits to continue," Hang says, and a continued moratorium will allow towns and citizens more time to push for stronger environmental cleanup protections.
As of last Monday, nearly 2,000 people and organizations had signed on to the letter. Now it's your turn. Anyone concerned about the flaws in the proposed rules (even folks outside NY) can read the letter and sign on right here. And if you can get a few celebrities to sign on, so much the better!

You'll also find an interactive map and the profile of 270 oil and gas spills at that site. And check out the facebook page "no fracking way".

Posted by Sue Heavenrich at 5:57 PM