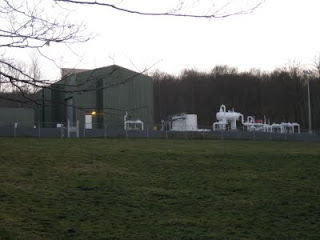 The current message to landowners situated over the Marcellus shale is that if they want to lease their land for good money, they need to provide a way for the gas company to get the gas out and send it to market. That means allowing drilling on their land and allowing pipelines.

It also means allowing gas compressor stations, and over the past summer Chesapeake Energy constructed a new and larger compressor station just a few miles from here. Gathering lines from six local wells carry natural gas to the station on Federal Road in Erin, NY. The compressors increase the gas pressure so it can be pushed into the Millennium Pipeline (which carries the gas off to NYC).


Chesapeake threw the on-switch last month and already two of the nearby neighbors are complaining about the noise.

“It runs 24 hours a day seven days a week,” said Richard Usack who lives close to 500 feet away. “It sounds like a lawnmower running outside my window all the time. This is ruining my life.”

And it’s not just the noise that bothers Usack. “At night it’s lit up like a Christmas tree,” he said, and those lights shine into his windows all night long. Usack has called Chesapeake a couple of times about his concerns, and they’ve sent someone down to measure the sound. But they don’t share the results with Usack.

What really bothers Usack, though, is that the town didn't have a site review or notify neighbors about the project. Sure, he sold the one-acre parcel to Columbia a few years back - and Columbia sold it to Chesapeake - but Usack didn’t realize they would use it for such a large compressor because the town has zoning. And that area is zoned residential/agricultural, not industrial. The compressor, he says, is industrial in nature.

According to the Town Code Enforcement officer John McCracken, Chesapeake, already had an existing compressor there. Therefore, they were exempt from everything except the building permit for the structure surrounding the compressor.

Flipping through the blueprints on his desk, McCracken reads off a few design specifications:  a hospital-grade muffler; estimated engine power around 700 hp; noise level expected to be 40 decibels at the site. Oh yeah, and it's powered by natural gas. More about that later.

McCracken estimates that Erin will see another five compressor stations as the Marcellus shale is developed. To place an essentially industrial activity in the currently zoned residential/agricultural district will require special use permits, he notes adding, “If towns don’t have zoning, they won’t be able to control where compressor stations are located.”

This is becoming a problem south of the border, in Bradford County, PA.  Brian Davis, Bradford County planner, says the county has no zoning and already there are three compression stations. He expects more to come.

Residents may have little say about where a compression station goes, but that doesn’t mean they’ll keep mum. When people complained about the noise at a compressor station near Albany, the company installed acoustic blankets inside the compressor station buildings to help muffle the sound.

Right now nobody in Erin is thinking about potential air quality concerns. That's because there's only one compressor in town. But Calvin Tillman, the mayor of Dish, Texas, warns that emissions from gas-powered compressor stations like the one in Erin have the potential to pose serious problem.

In a phone interview last week he explained some of the problems Dish residents were experiencing. But we have eleven compressor engines, he emphasized. The problem is, they are located just outside the town boundaries, and just beyond town jurisdiction. Dish has no control over where those compressors are located.

"Texas allows the companies to permit each station separately," Tillman explained. It's done with "permit by rule". As long as each compressor does not reach or exceed the allowable emissions threshold they are permitted. "They don't consider the cumulative effect of all the compressors in the area," he said.

The air in Dish got so bad that the folks in town voted to use  a chunk of taxpayer money - 15 percent of their annual budget - to fund an air quality study. Of course, the energy companies have been saying our study wasn't well done, Tillman said. But now the Texas Commission of Environmental Quality is conducting their own studies and, according to Tillman, their results support the earlier Dish study. Results are posted on the town website at www.townofdish.com

Posted by Sue Heavenrich at 9:28 AM