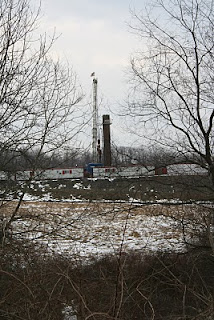 Yesterday, December 30, Region 2 of the EPA sent 17 pages of formal comments to NY State Department of Environmental Conservation (DEC) regarding proposed rules for drilling in Marcellus and shales. According to the EPA, the DEC needs to review and expand their analysis on the cumulative and indirect impacts in the draft Supplemental Generic Environmental Impact Statement (dSGEIS). In addition, says the EPA, "greater emphasis needs to be placed on the potential health impacts that may be associated with gas drilling and hydrofracturing."

EPA is particularly concerned about the potential risks gas drilling poses to the New York City watershed. Despite the mitigation measures proposed in the SGEIS, EPA questions whether drilling in the NYC watershed is consistent with the long-term maintenance of the unfiltered water supply.

In addition, EPA lists a number of other issues of particular concern: water supply, water quality, wastewater treatment, local and regional air quality and management of Naturally Occurring Radioactive Materials (NORM) disturbed during drilling. The EPA monitors plans for disposal of water and brine containing NORM. In their comments, however, EPA notes that NORM concentrations in production brine of Marcellus wells have the potential to far exceed the Maximum Contamination Limits (MCLs) specified in the Safe Drinking Water Act (SDWA). So if brine is going to go through pre-treatments and end up eventually discharged into somebody's drinking water, EPA wants New York to figure out how to meet the federal regulatory levels. They also question the inconsistency of reporting concentration levels; levels of some radionuclides are reported in pico-Curies per gram (pCi/g) while others are reported in parts per million (ppm). Using ppm as an analytical tool could "significantly underestimate the uranium concentrations," says EPA.

The EPA also notes that the dSGEIS supplements the existing 1992 GEIS. But in the 17 years since the GEIS was written, the "existing environment and conditions in New York State have changed significantly". Reliance on the original GEIS as a "baseline" does not take into account the cumulative impacts fom habitat fragmentation and other impacts that may have occurred during the intervening years.
Posted by Sue Heavenrich at 3:13 PM