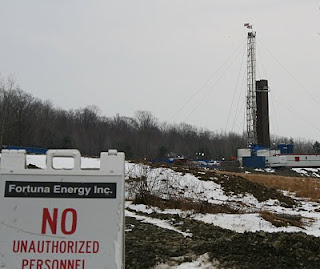 Just one month ago the NY Office of the Attorney General announced that some landowners would be able to renegotiate the terms of their gas lease - or get out of their lease altogether. In an agreement between Fortuna and the OAG, the gas drilling company promised to stop using misleading tactics to unilaterally extend leases on properties. They also agreed to pay $192,500 to the state to help settle the matter.

“Drilling companies will not be permitted to use misleading letters and dubious legal claims to bully landowners,” Attorney General Andrew Cuomo said. “Many of these companies use their size and extensive resources to manipulate individual property owners who often cannot afford to hire a private attorney,” he said, adding that this type of land-grabbing practice must stop.

Back in April, Fortuna sent letters to hundreds of landowners whose natural gas leases with the company were about to expire. These letters falsely stated that Fortuna had the right to extend these leases without the permission of the landowners.

Fortuna claimed (falsely) that the leases contained a provision that allowed them to put the lease on hold until the New York State Department of Environmental Conservation (DEC) got around to issuing permits for horizontal drilling in the Marcellus. But, says the OAG, most landowners’ leases contained no such provisions.

In these letters Fortuna offered landowners 30 days to extend their leases for an additional three years, with a small increase in the royalty. Landowners choosing to not extend their leases would be sent a “Notice of Force Majeure”, and Fortuna would file the notices with county clerks as well. That would prevent landowners from freely negotiating drilling rights with other companies.

Not only did landowners feel that these letters were corporate bullying, but they also felt that the gas companies who were threatening Force Majeure were giving new meaning to the concept of "we can't drill." You see, no one was preventing gas companies from drilling vertical wells, and there are plenty of other gas-bearing strata in the area. Not only that, other companies were actively drilling.

The letters motivated enough landowners in one county to seek assistance from the OAG. They wrote to the Attorney General, sending along copies of what they felt were misleading leases. Some wrote multiple letters, but eventually the OAG paid attention.

Give Fortuna credit for sitting down at the table with the OAG, because they certainly aren't the only player in this game. Chesapeake also sent out similar letters this summer, and so far they haven't come to the table with the Attorney General. Not only that, Chesapeake decided to try extending the old 10-year leases they bought up a few years back. Some of these leases were so old that when they were signed the going rental rate was $3 - $5/acre.

So, when the landmen filled out these leases, they left blanks instead of penning in an extension of the lease term. Back in 2008, decided they would not extend the leases beyond the primary term, and sent letters to landowners saying so.

But what a lot of difference a year makes! This July Chesapeake changed their mind and told landowners that they would extend the leases - keeping to the original terms, of course. So while their neighbors were negotiating deals close to $3,000/acre, Chesapeake was threatening to extend leases up to an additional decade at three bucks an acre!

Then, this fall, began sending out checks to landowners to “continue and extend for another year” their leases. Even if the landowners don’t cash the checks, they were led to believe that their lease would be extended.

door to door with their notepads full of company leases. And, according to folks they've visited, they're using the same pressure tactics.