What to do With Drilling Wastewater? Use it again! 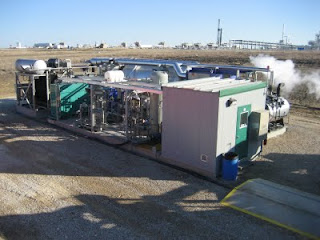 Whether you are pro-drilling or not, the issue that tops discussion about Marcellus gas wells is what to do with the water. You know: the frack flowback and, after that, the brine and other water produced by the shale formation.

Since last fall Nick Schoonover, founder of the Tioga County Landowners Group, has been telling the NY State Department of Environmental Conservation (DEC), industry representatives, landowners and anyone else who would listen that "closed loop drilling" might be the solution. [photo of a NOMAD mobile evaporator from Aqua Pure Ventures, Calgary in use in the Barnet Shale field]

Part of the reason a conventional drilling site requires a large well pad, says Schoonover, is they've got to have somewhere to hold the drilling slurry and other wastewater coming out of the well. Drilling a vertical well into Trenton Black River and other formations takes close to 350,000 gallons of water and fracking fluid. The horizontal drilling and fracking required to extract natural gas from the Marcellus Shale will require million of gallons - somewhere between 3 and 5 million gallons of water per well. The water will come out of our local rivers, streams, lakes and ponds and will most likely be trucked in by large tankers.

Add to that the tanker trucks needed to haul off the wastewater and you've got about 1,000 truck trips on our country roads (closer to 7200 for an 8-well pad). Not only is that a lot of wear and tear on the roads, but it's a lot of fuel going up in exhaust and a lot of water.

A closed loop system offers an opportunity for on-site wastewater treatment. The process involves separating solids from liquids, using both mechanical means (shaking and screens) and chemical means. A centrifuge spins the water out of the solids. Then the water can be stored for re-use in the drilling process. According to the EPA, drillers using this method see an 80 percent reduction in use of water. Schoonover pointed out that re-using water could reduce truck traffic nearly 75 percent and would eliminate the need for reserve pits.

A study by OGAP (Oil & Gas Accountability Project)  of two wells in backs up Schoonover’s figures. The wells were drilled 200 feet apart. One used closed loop drilling and the other used conventional drilling with a waste pit. The two wells were drilled into the same formation, and used the same crew and the same drilling rig. The well using the closed loop system not only saved 43 percent in costs for drilling fluids, but they also saved money on drill bits and the drillers finished the job quicker than the conventional well.